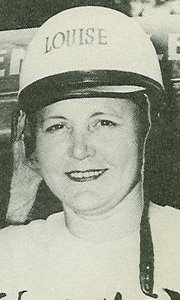 "The First Lady of Stock Car Racing," Louise Smith died Saturday at the age of 89. She had battled cancer in recent years, and had been under hospice care in Anderson, SC, at the time of her death.

Smith was born in Barnesville, Ga., but moved to Greenville, SC, at the age of four. Her father and brothers were all mechanics, and early on, she exhibited a flair for things mechanical. One of her early memories was driving her father's Model T into the family chickenhouse, and as she grew older, she developed a well-deserved reputation for having a heavy right foot.

Knowing a good draw when he saw one, NASCAR founder Bill France Sr. entered Smith in a race at the legendary Greenville-Pickens Speedway in the late 1940s, and her career blossomed from there. Smith recalled her introduction to the sport, saying, “Bill France wanted somebody that would draw people. He asked about women drivers, and they told him there weren’t any at the track. But somebody said, ‘I know one that will drive. She’s the craziest woman I know.’ Bill got in touch with me, and I went out there."

Smith drove a 1939 Modified Ford Coupe to a third-place finish that day -- her first time in a racecar, and competed for nearly a decade in Modified, Sportsman and Grand National -- now Nextel Cup -- cars. She never won on the Grand National circuit, but carried 38 checkered flags in other events, against such competition as Buck Baker, Curtis Turner and the Flock Brothers.

A devastating crash in Hillsborough, N.C., nearly ended her career. After setting the track record on her first qualifying lap, Smith went airborne and crashed heavily, flattening a number of trees. Torches were required to cut her free from the twisted wreckage, and she needed 48 stitches to close her wounds, along with four pins in her shattered left knee. She retired from driving in 1956, but remained a familiar face around area speedways for many years; sponsoring teams and working with beauty pageants associated with major races.

Services for Louise Smith were held Monday in the chapel of Westville (SC) Funeral Home, with interment in Graceland West Cemetary in Greenville.
Posted by Dave Moody at 2:14 PM