Round One of the much-discussed battle for 410 winged Sprint Car superiority appears to have gone to the World of Outlaws. The Outlaws went head-to-head with the rival National Sprint Tour this past weekend, racing at Tri-State Speedway in Haubstadt, Indiana, while the NST competed at Outlaw Motor Speedway in Oktaha, Oklahoma.

Up to now, it has been difficult to get an accurate "read" on either series, since they have avoided booking races on competing dates, allowing drivers to cross-over and support both sanctioning bodies. In addition, the Outlaws had co-sanctioned an early season race or two with the All-Star Circuit of Champions; boosting car counts above what either circuit might draw by itself. But with the All Stars in action at Ohio's Attica Raceway Park Saturday night, both the Outlaws and the NST finally got down to the nitty gritty; with only their dyed-in-the-wool regulars on hand. 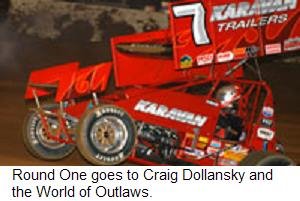 The WoO had 30 cars entered at Tri-City, and started a full field of 24 Sprinters. The NST, meanwhile, managed just 19 entries in Oklahoma, with 18 starting the A-Main. One "Sirius Speedway" listener in the grandstands reported considerable grumbling over the short field, and the griping probably intensified when Danny "The Dude" Lasoski wired all 30 laps en route to the win, topping Tim Kaeding, Steve Kinser, Jason Sides and Jason Solwold. Paul McMahon shattered the all-time Outlaw Motor Speedway track record in qualifying, stopping the clocks in 14.998 seconds; the first sub-15 second lap in track history. But time trials are little more than an appetizer for hungry race fans. The meat and potatoes come in the main event, and Lasoski's wire-to-wire win over a decidedly short field almost certainly left the fans in attendance hungry for more.

But don't start crowing yet, Outlaw backers. A 3o-car field is nothing to get worked up about, either, and while there was reportedly a bit more action in Craig Dollansky's A-main win over Terry McCarl, Rob Chaney, Jac Haudenschild and Brooke Tatnell, Boundless Motorsports still has some work to do to get the series back where it used to be.

Sadly -- in the early going, at least -- it appears that the World of Outlaws and National Sprint Tour have succeeded in doing to 410 winged Sprint Cars what the Indy Racing League and Champ Car World Series have done to Open Wheel racing; taking one tremendous series and splitting it into two mediocre ones.