It didn’t take long to debunk columnist Peter DeLorenzo’s recent claim that one of the “Big Three” U.S. manufacturers is making plans to leave NASCAR. 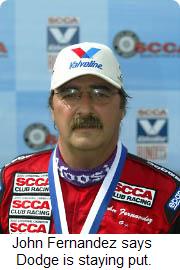 We punched a number of gaping holes in DeLorenzo’s theory during a live interview Thursday, and within 24 hours, representatives of both Ford Motor Company and Daimler-Chrysler joined the chorus of industry insiders labeling the column pure bunk. Dodge Director of Motorsports Operations John Fernandez left no doubt where his company stands, saying, “We’re not involved in it, (and) I haven’t heard anything from General Motors or Ford that indicates they’re in any jeopardy. Obviously their companies right now are having a tough time in the marketplace, but that’s happened before, and it’ll happen again, I’m sure. As far as I know, GM and Ford are still committed to NASCAR and committed to racing in the Cup Series.”

Since DeLorenzo’s column hit the internet, much of the speculation has centered on General Motors – parent company of Chevrolet -- which lost $10.6 billion in 2005, and $323 million in the first quarter of this year. However, Alba Colon, Chevrolet’s Nextel Cup program manager, said Thursday that if discussions are ongoing about withdrawing from NASCAR, she hasn’t heard of them.

“I have never been in a meeting where anything like that has been discussed,” said Colon Thursday at Phoenix International Raceway. “We have a commitment with all our teams, a long-term commitment. It’s longer than a year, I can tell you that. It’s more than the end of this year, and it’s not GM’s philosophy to break contracts like that.”

Dodge’s Fernandez said his company remains committed to the “Win On Sunday, Sell On Monday” philosophy that has long kept the “Big Three” involved in NASCAR.

“We still believe (NASCAR is) the right place to show off the image we’re trying to project for the Dodge brand,” he said. “Quite frankly, we’re just getting in position now to win some races and show some strength with our program. We’ve won three of the first seven (races), and we probably should have won Daytona. I’m pretty comfortable with where we’re at. We’ve got a long way to go before we want to quit.”

Once again, for the record. Peter DeLorenzo, you’re out to lunch.
Posted by Dave Moody at 7:17 PM