Listener Matt Martel races this 1980 Chrysler Cordoba (complete with Dodge Mirada nose) in the Street Stock Class at Sangudo Raceway in Sangudo, Alberta, Canada; just over an hour from Edmonton. The 2006 season will be his third in racing, after taking a year off to get married and buy a new home. Matt's father serves as his pitcrew, and his wife also drives the car each weekend in Lady Stock races. Thanks Matt!

Listener Bob Humphreys campaigned the #19 Legends Car at Champion Speedway in Carson City, Nevada last season, winning the first two main events of his career, and finishing tenth in the West Coast Legends Classic at Shasta Speedway in Anderson, CA. Unfortunately, Bob and his team are looking for a new track, after Champion Speedway closed during the offseason. Bob's team is also family based, including his wife, Jaime, children Shelby (5) and Travis (3), his parents (Bob & Joyce) and brother Don, along with Tom Berek, Mike Hubert Jr., and "Stitch," the team's 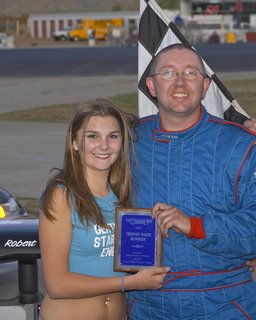 Bob really seems to enjoy himself in Victory Lane, and it's no wonder! Attaboy, Bob!
Posted by Dave Moody at 10:47 AM