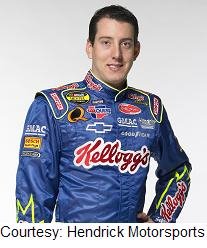 On lap 99 of the event, Busch and Mears tangled at one end of the racetrack, just as a multi-car incident broke out at the other. Busch spun and did considerable damage to his Carquest-sponsored Chevrolet, while in turn four, Elliott Sadler, Joe Nemechek, Michael Waltrip and others sat in a steaming, twisted heap of battered sheetmetal. NASCAR immediately threw the red flag, due to the severity of the crash, and the fact that the track was effectively blocked. Despite the red lights flashing around the speedway, Busch refired his car and drove halfway around the track to where Mears' Dodge sat, hitting it from behind, then driving down pit road and directly behind the wall.

How serious was the contact between Busch and Mears? Somewhere between a "nudge" and a "slam," depending on your point of view. What is not debatable is the fact that Busch ignored the red flag, breaking one of the cardinal rules of NASCAR racing. For the record, drivers are required to stop their cars immediately when the red flag is displayed, in order for emergency vehicles to be dispatched as quickly and safely as possible. Busch failed to do so, ignoring the fact that one of his fellow drivers (Sadler) was sitting in a burning racecar after a vicious hit.

Fortunately, all drivers emerged unscathed. Busch retired to his Hendrick Motorsports transporter, followed closely by his team's PR rep and (we're told) a pair of NASCAR officials. Almost immediately, an unidentified voice on the team's in-car radio said, "Tell him not to make any comments until after he sees what happened." Busch did that and more, secluding himself in the hauler until repairs were made to his car, and declining repeated requests for radio and TV interviews. After eventually returning to the track, he was immediately black-flagged by NASCAR and held an additional five laps on pit road for rough driving.

The penalty was NASCAR's way of saying, "We saw what you did, we're not happy, and you'd better not mess up again tonight." However, in terms of punishment, Busch's five-lap penalty was no penalty at all. He limped home to a 36th place finish, exactly where he would have finished without the five aditional lost laps.

Busch refused to comment after the race, and his crewchief, Alan Gustafson, offered only a lukewarm defense, saying, “He was frustrated. When you're in that racecar, sometimes you don't have the whole perspective. He was frustrated with Casey, but I don't think that's an excuse. Sometimes things happen that don't go your way, and you've got to react to those calmly. We need to respect the red flag. The No. 1 priority in that situation is safety to other people, and that's what we got away from."

Gustafson clearly has the clear-headed perspective that his driver lacks. Once again, Kyle Busch has gotten himself in trouble with NASCAR, this time for placing the fulfillment of a personal vendetta over the health and safety of his fellow drivers. That attitude cannot be tolerated. NASCAR needs to send a clear message that the red flag cannot -- and will not -- be ignored. While an actual suspension may be too much to ask, hefty monetary fines, points penalties and a lengthy probation are all warranted.

It's time to break out the chainsaw and give "Shrub" a little trim.
Posted by Dave Moody at 12:30 PM