Thank You, Tony and Jimmie 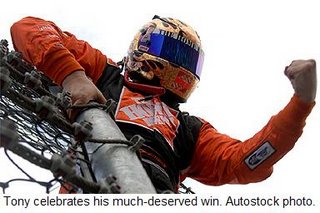 Thank you, Tony Stewart and Jimmie Johnson, for showing the world what short track racing is supposed to be!

In the final 50 laps yesterday at Martinsville Speedway, Stewart and Johnson battled for the lead, badgered each other relentlessly, swapped the top spot a handful of times, and traded just a little bit of paint en route to the checkered flag in the DirecTV 500. They ran side-by-side for four consecutive laps at one point -- with 65,000 frenzied fan standing and cheering the whole way -- before Stewart finally got the edge and drove away to the victory. Amazingly, nobody got dumped yesterday, or even fell victim to the dreaded "bump-and-run" that has become such an integral and accepted part of short track racing in NASCAR-land. Instead, Stewart and Johnson gave an exhibition of short track racing at its best, jousting back and forth with incredible ferocity, while never putting a wheel out of place.

"I knew we were a little quicker than him," said Stewart afterward. "There was no way he was going to give it away, so we were going to have to take it away. We didn't turn him around. We didn't spin him out. We just got the position that we were after."

Johnson agreed, saying his battle with Stewart was nothing more than good, hard racing, though still coming away disappointed with the final result.

Sunday's Stewart-Johnson battle has been badly needed in NASCAR for quite some time. Until yesterday, I have been hard-pressed to explain to people that what they see on TV at tracks like Bristol and Martinsville is not short track racing. Or rather, it's not the short track racing I grew up watching as a kid, and still get to see at the local and regional level. That racing is as hotly contested and incredibly intense as anything you'll find on the NASCAR Nextel Cup Series, but somehow still retains a healthy respect for the competition. The "bump-and-run" is not only frowned upon at that level of the sport, it is scorned; looked upon as a desperate manuver that taints any victory it might bring.

The Cardinal Rule of short track racing where I grew up is," Give the other guy a lane. If you want the bottom of the racetrack, take it. But leave him room to drive around you, if he's good enough to do it."

Sadly, many drivers at the top of the NASCAR feeding chain seem to have lost touch with that kind of thinking. The stakes are so high -- and the rewards so great -- that drivers see nothing wrong with sticking a guy in the wall with five laps to go, if that's what it takes to win. The mantra has now become, "Do what you have to do," and that's a crying shame.

Yesterday, Tony Stewart and Jimmie Johnson went to war at Martinsville, but they did it the right way. Running door to door, they battled fiercely for those six tiny inches of asphalt that decide most races; the six inches between me and you that determine who comes off the corner hardest. Stewart did all he could to crowd Johnson high yesterday, while Jimmie did his damndest to squeeze Tony low. On a couple of occasions, Johnson's car kicked sideways, giving Stewart all the opening he needed to deliver a well-placed fender and send his challenger spinning. Instead, he gave Johnson the time and space he needed to right himself, before beginning the battle anew.

In the end, as Stewart climbed the fence at the start/finish line, he was engulfed by a tidal wave of cheers. Later, he met with the media without having to stammer his way through a halfhearted defense of an inexcusable "bump-and-run" final lap dump job. And later still, he returned home to Indianapolis with one of Martinsville's coveted grandfather clock trophies, secure in the knowledge that he had won it the right way.

Thank you, Tony -- and Jimmie -- for restoring my faith in NASCAR racing the way it should be. Hopefully, I'm not the only only who noticed.
Posted by Dave Moody at 1:12 PM