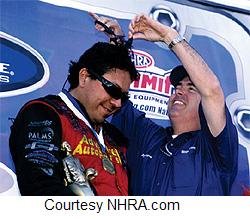 NHRA.com columnist and weekly Sirius Speedway contributor Rob Geiger got the first crack at Funny Car driver Cruz Pedregon's hair last Sunday in Las Vegas, after The Cruzer finally snapped a 97-race winless streak with a 5.417 second, 266.16 mph Final Round win over point leader Ron Capps. Pedregon had vowed not to cut his hair until he won another race, and in recent months, was in danger of being mistaken for "Huggy Bear" from the old Starsky and Hutch TV show.

After a mention in Geiger's weekly "Geiger Counter" column (a must-read for drag racing fans, by the way) Pedregon agreed to let Geiger take the first snip, and our boy Rob gladly obliged in Victory Lane at the Strip at Las Vegas Motor Speedway. The rest of the job will be handled this weekend on ESPN2's NHRA 2Day.

Much has been said about the dust-up between Greg Biffle's girlfriend, Nicole Lunders, and Eva Bryan (fiancee of Kurt Busch) last Sunday at Texas Motor Speedway. For the record, Lunders marched down to Busch's pitbox after contact between the two drivers sent Biffle spinning into the wall, and out of the race. The two women are (or at least were) good friends, but that didn't stop Lunders from delivering a few choice words, punctuated by a waggling right index finger.

No blows were exchanged, but NASCAR made it clear this week that they are not interested in staging a World Wrestling Entertainment style "Diva Slapdown" on pit road. NASCAR Vice President of Competition Robin Pemberton said Tuesday, "There will be some conversations with the people that participated, and we'll make sure that this doesn't carry on and into the garage or anywhere else. Tempers flare, and we'll look at that and make sure it doesn't carry on any further."

Technically, Lunders could have subjected Biffle to a fine, or even a points penalty, since "significant others" are in the NASCAR garage under the same type of credential issued to team members. Unofficially, however, most of the NASCAR community reacted with a snicker and the admission that, from time to time, "girls will be girls."

terling Marlin last weekend in Texas. After the two got together and Newman crashed, the Penske Racing South driver said, "I'm pretty sure Sterling's hairpiece got in his eyes and he couldn't see what was going on."

Judging from the calls we've received this week, reaction to Newman's crack is equally divided between, "Poor Sterling, that was a low blow," and, "Oh my God, Sterling Marlin wears a RUG?!?"

For the record, if it is true, you didn't hear it from us. And besides, Marlin has been known to land a punch below the belt himself, from time to time. It was he who first christened Greg Biffle "a bug-eyed dummy" a few years ago, a nickname that still finds its way into print from time to time.

Newman finished 40th Sunday, and has now fallen all the way to 18th in Nextel Cup points, possibly explaining his recent grumpiness.