Fight Night At The Magic Mile

Look at it as an easy way to avoid going bankrupt at the blackjack table.

A number of crewmen for the David Starr and Todd Bodine NASCAR Craftsman Truck Series teams will likely get next weekend -- and a few more after that -- off, in the aftermath of a postrace donnybrook at New Hampshire Motor Speedway Saturday. 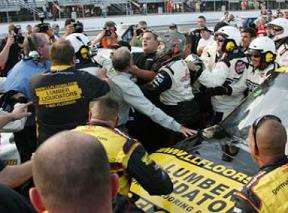 Starr tangled with both Bodine and his Germain Motorsports teammate-for-a-day, David Reutimann in the latter stages of Saturday’s Camping World RV Rentals 200, sending both Bodine and Reutimann into the wall and out of contention. Bodine bumped Starr’s truck from behind as they exitted the track after the race, and several Germain crewmembers were waiting for Starr when he arrived on pit road.

One of them unfastened Starr’s window net and allegedly spit on him, with a major confrontation ensuing. Starr exitted his truck and landed a pair of first-class haymakers to the face of the offending crewmember, as at least a dozen other crewmen waded into the fray. It took NASCAR officials 3-4 minutes to quell the uprising, and just as order seemed to have been restored, the fight flared up again.

At least one NASCAR official appeared to be knocked to the ground in the melee, and a number of others were shoved aside by brawling crewmen. One NASCAR security official left the scene with blood –- apparently someone else’s -– splattered across his shirt.

“When I saw somebody spit on me, I was just protecting myself,” said Starr afterward. “Where I come from, we protect ourselves. We don’t get walked over, and I’m not going to let anybody walk over me. I don’t mind it if a driver wants to come over and talk to me, but when somebody else…is cussing me and spit on me, well then we’ve got a problem.”

Starr and his crewchief, Rick Gay, were summed to the NASCAR hauler after the race, as were Bodine’s crewchief, Mike Hillman Jr. and three other Germain team members. Bodine was not involved in the fracas, choosing to sit it out in his truck. 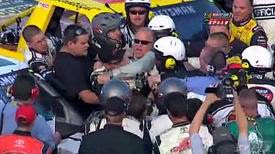 “My crew was upset,” said Bodine once calm had beeb restored. “They deserve to be. (Starr) wrecked both of our trucks. One thing about Germain Racing is everybody works on everything. Everybody takes it personal when somebody wrecks their vehicle, and he wrecked both of ours today.

“David Starr is a good person and a great guy to hang out with. There’s nothing wrong with David. He just made two mistakes today.”

Starr disagreed, accusing Bodine of turning down on him in the corners. “We trade paint, we beat and bang and we bump each other but we don’t take each other out. We’re good friends, but friends stop when they’re cutting you off and doing that kind of stuff. That was ridiculous.”

Expect NASCAR to hand down a series of multi-race suspensions and fines as early as Tuesday.
Posted by Dave Moody at 8:39 AM