DEI President of Global Operations Max Siegel admitted today that his team is embroiled in a bidding war for the services of driver Paul Menard in 2009 and beyond. Siegel told the Charlotte Observer, "We're in the heat of competition for Paul. As of right now, nothing has changed, but my gut feeling seems to change frequently." 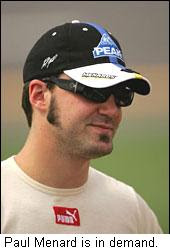 Sources say DEI and Yates Racing are both negotiating to sign Menard to multi-year contracts, but Siegel and Doug Yates both insist that no deals have been made. Yates says only that he would like to expand to four teams in the future, while admitting that he has talked to Menard, and feels he has “a very good chance” to sign him.

"I think this will all come together one way or another with Paul shortly,” said Yates at Dover International Speedway today. “I'd like to be able to answer the question today, but I can't."

Menard is in his second full season of Sprint Cup competition, and has recorded just one top-10 finish in 66 career starts. He currently ranks 27th in championship points. 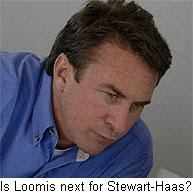 Stewart-Haas Wooing Loomis: Sirius Speedway has learned that Petty Enterprises Vice President of Racing Operations Robbie Loomis is now at the top of Stewart-Haas Racing’s wish list, as they attempt to hire a new Vice President/General Manager. Red Bull Racing’s Jay Frye recently turned down the job in favor of remaining in his current position, and sources says Stewart-Haas is now interested in talking with Loomis. 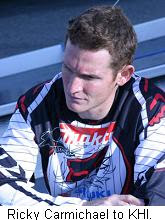 Team owner Kevin Harvick confirmed the move today, saying, "We want to put Ricky in a third Truck. He knows how to race, whether it's a car or truck or motorcycle. He's got that will and determination to make something happen. I like what he's done in the Camping World East Series." Harvick said sponsorship still must be secured for the new entry. He also revealed that KHI will field a full-time NASCAR Nationwide Series Chevrolet, to be driven by himself and Cale Gale.

Within the last three weeks, the team has been reported ready to merge with Michael Waltrip Racing, Penske Racing and Robby Gordon Motorsports, along with unconfirmed reports that Ganassi might bow out of NASCAR entirely. The latest comes from Sports Illustrated’s SI.com, which reported today that Ganassi is planning to join forces with Gillett Evernham Motorsports; the same team that just days ago was said to be ready to purchased Bill Davis Racing’s Cup operation.

Gillett Evernham’s Mark McArdle confirmed recently that the team is interested in acquiring a fourth car with a guaranteed spot in the Top-35 in owner points for next season. Ganassi has two cars currently in the Top-35, but has strongly denied any talks with Gillett-Evernham, saying he currently has no plans to merge with anyone, plans to run two cars full-time in 2009, and is in the sport for the long haul. Spokesmen for Gillett-Evernham declined to comment on the latest report.
Posted by Dave Moody at 3:39 PM