NASCAR Sprint Cup Series racing has become big business, and there's no better example of that than the situation currently surrounding Kyle Petty. 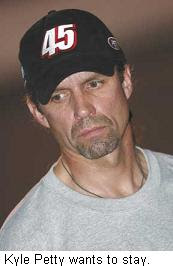 According to numerous sources in the Sprint Cup garage, yesterday’s Camping World RV Sales 400 at Kansas Speedway may have been Kyle's last race for Petty Enterprises. Petty has said little about his future with the team, other than that he would like to continue running a limited schedule of events next season. His wife, Pattie, has been more outspoken, however, telling the Winston-Salem Journal this weekend that her husband is effectively being forced out by the team his grandfather chartered in 1949.

"Maybe I'm the only one here willing to tell the truth," she said. "They told him at Watkins Glen -- right when he was standing there in his driver's suit -- that they didn't want him in the car. They haven't wanted Kyle in the car the last three years. They want a young driver… but Wells Fargo, our sponsor, says it's going to stay with Kyle, whatever he does.

"I wish Chip Ganassi would take a look at Kyle. He's got a 12-race sponsorship deal for next year that would be a perfect part-time schedule. And Kyle could help mentor a young driver."

Petty Enterprises Vice President for Racing Operations Robbie Loomis said recently that the team's current level of performance will not allow them to hire a championship contending driver, or another former champion like Bobby Labonte. Instead, Loomis said he hopes to cultivate a new superstar, plucking a talented youngster from the ranks and working with him to create a a winning team. To that end, AJ Allmendinger is said to be talking to Petty Enterprises about a spot in the #45 Dodge next season, as are current Michael Waltrip Racing driver Michael McDowell and Chad McCumbee, who has driven a limited schedule in the #45 Dodge in each of the last two seasons.

At age 48, Kyle Petty is obviously not the future of Petty Enterprises. The question is, how much time should the team give him to ease out of the driver's seat?

The last of his eight career NASCAR Sprint Cup Series wins came in 1995, when Winston was still the series sponsor, and Felix Sabates' Coors Light Dodge was one of the hottest rides on the circuit. It's been a long, long time since then. 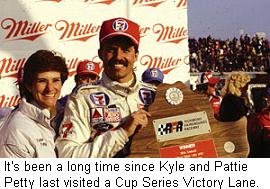 Petty has finished no better than 15th in points since 1994, and in his last two full-time seasons -- 2005 and 2006 -- he finished 27th and 32nd in points, respectively. His best finish this season came at Richmond a few weeks ago when he finished 24th, and he has failed to qualify twice; at Martinsville and Phoenix.

Most drivers with numbers like that find themselves out of a ride, and quickly. But Kyle Petty is not "most drivers." He is the last of NASCAR's greatest family of drivers, running the final races of his career in the lingering shadows of his legendary father and grandfather, in memory of the son who should have lived to carry on their legacy for at least another generation.

In a perfect world, Kyle Petty should be able to choose his own exit strategy. He should be able to run part-time schedules until his heart and conscience agree that it's finally time to go. But NASCAR Sprint Cup racing is far from a perfect world. It's a heartless, "what-have-you-done-for-me-lately" business that values performance over emotion, and has no use for pity.

Petty Enterprises probably cannot afford another season at the back of the pack. Another year of status-quo will put them even further behind, and leave them 12 months further away from finding that young lion to lead them back from the brink. But before the new driver arrives, Kyle Petty has got to go.

It's a process none of us are especially anxious to watch.
Posted by Dave Moody at 1:27 PM