Sirius Speedway has learned that GEICO Insurance will team with Italian road course expert Max Papis to run as many as 18 NASCAR Sprint Cup Series races next season, in Toyotas fielded by Germain Motorsports. 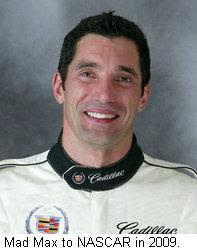 GEICO currently sponsors veteran Mike Wallace on the NASCAR Nationwide Series, but cannot remain in NASCAR’s number two series beyond 2009, due to language in the sanctioning body’s contract with major sponsor, Nationwide. They can, however, move to either the Sprint Cup or Truck ranks. Wallace said recently that he is already looking for a new backer, adding, “We have an indication of what (GEICO is) going to do, (and) for me to continue to race in years to come, I’ve got to go find another sponsor."

A spokesperson for Germain Motorsports declined to comment earlier today.

In other Nationwide Series news, David Ragan says he expects to compete in the Nationwide ranks again next year, but possibly not on a full-time basis. Ragan is one of four Sprint Cup drivers to run the complete Nationwide schedule this season – along with Carl Edwards, Clint Bowyer and David Reutimann – and said he plans to run at least 25 or 30 Nationwide events in 2009.

Bowyer has said he will probably not run all the Nationwide races next year, while Reutimann definitely will not. Edwards’ 2009 Nationwide schedule has not yet been determined.

And finally, published reports say that Nationwide Series veteran Jason Keller has been informed by CJM Racing that they will not renew his contract for next season, leaving him out of a ride for 2009. Since making his Series debut in 1991 at Lanier Speedway in Georgia, Keller has racked up 10 wins, more than 80 Top-5 and 160 Top-10 finishes, while becoming the series’ all-time leader in career starts.

He is currently 11th in championship points, with a top finish of third at Gateway in late July.
Posted by Dave Moody at 2:37 PM