UPS has reportedly reached to a multiyear agreement with Roush-Fenway Racing to sponsor David Ragan and the No. 6 Ford Fusion next season, with an official announcement expected within the next two weeks. 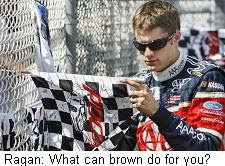 UPS will leave Michael Waltrip Racing at the end of the 2008 campaign, after backing Dale Jarrett and David Reutimann for the last two years. Ragan is in his second year of Sprint Cup competition, and ranks as one of NASCAR’s most improved drivers. He is currently 13th in the championship standing, just 17 points out of the Chase with one regular season race remaining.

No Big Name For Pettys: Petty Enterprises Vice President of Racing Operations Robbie Loomis said this weekend that the team understands it will probably not be able to sign an A-List driver to join Bobby Labonte next season.

Loomis said, “We are very aggressive on moving forward, but based on where our cars are running right now, we won't be able to get that A-level driver. We have to create that player, like Brett Favre at Green Bay.”

Loomis said Kyle Petty will run some races in the #45 Dodge next year, splitting the ride with a new driver the team hopes can eventually become a big-name NASCAR star.

And Finally: The most popular driver in all of drag racing failed to qualify for the sport's biggest race this weekend, and happily, the sport seems to be surviving the blow. 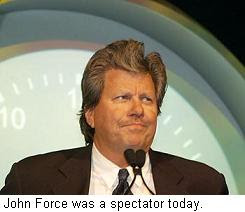 For the second year in a row, John Force failed to qualify for today's Funny Car eliminations at the Mac Tools U.S. Nationals at O'Reilly Raceway Park in Indianapolis. For those unfamiliar, Force is a 14-time World Champion, and a bigger draw than either Dale Earnhardt, Jr. or Jeff Gordon in NASCAR. But he failed to crack the top 16 in qualifying yesterday, and as a result, he spent Labor Day Monday watching his daughter, Ashley, race, signing autographs and stopping by the ESPN broadcast booth.

You see, the National Hot Rod Association awards no provisional starting spots. They have no Past Champions’ Provisionals or Top-35 lock-ins to ensure guys like Force that they will race every weekend, regardless of performance. Unlike NASCAR, the NHRA prefers to set its qualifying fields on speed and speed alone, with no regard for popularity, point standings, or the size of someone's sponsor.

Force’s DNQ was perhaps the biggest story of the weekend in motorsports. It was in all the newspapers, and yet, the grandstands were packed at ORP today. Legions of Force fans did not, in fact, stay home, refusing to support a race that does not include their favorite driver. Force's multi-million dollar sponsor -- Castrol GTX Motor Oil – has also not yet torn up his sponsorship contract.

Could the same thing happen here in NASCAR? Could the sport survive if a major star like Kyle Busch, Jeff Gordon, or (God forbid) Dale Earnhardt, Jr., failed to qualify one day?