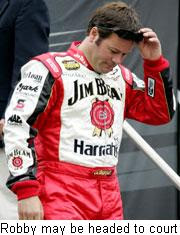 GEM also agreed to provide Gordon with the infrastructure needed to compete, and to support his #7 Dodge in “substantially the same manner in which GEM supports its most supported car in the NASCAR Sprint Cup” during the remainder of this season. The contract also included a clause that barred Gordon from talking with other teams about mergers.

The deal was agreed to on Jan. 29, pending an audit and other due diligence from Gillett Evernham. It was signed just three days before the parties announced a technical, manufacturing and marketing partnership. Gillett Evernham says they attempted to close the deal as planned, only to have Gordon ask out of the arrangement in May, in exchange for an engine deal for the remainder of the 2008 season.

In the suit, Gillett Evernham says Gordon violated the exclusivity clause by talking to other teams about merging, and told a a DirecTV audience last month at Watkins Glen that his engines were inferior to those of the Gillett Evernham drivers. Gillett Evernham is asking for unspecified damages, and for the agreement to be declared null and void.

Gordon says he “categorically reject(s) the allegations that are contained in the complaint, and the truth will come out if the case proceeds. In the meantime, we think it is best to allow that to happen in the court proceedings rather than in the media.”
Posted by Dave Moody at 12:58 PM