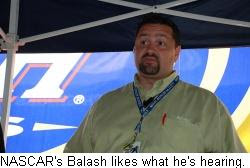 NASCAR Nationwide Series Director Joe Balash sounded understandably proud yesterday, talking about his new baby, the proposed new Nationwide Series “Car Of Tomorrow.” After nearly two full days of testing at Richmond International Raceway, it was difficult to find anyone with anything negative to say about the new racer.

Defending Nationwide Series champion Carl Edwards was typical of those commenting on the new car, saying it actually handled better than its Sprint Cup brethren. Edwards called it “a mix between the current Nationwide car and the Cup car,” and expressed happiness with its driveability. Edwards and his Roush-Fenway Racing teammate David Ragan did the testing for Ford, joining Toyota’s David Reutimann, Chevy pilots Scott Wimmer and Morgan Shepherd, and Dodge’s Bryan Clauson.

“I’m excited about the car,” said Wimmer. “We’ve been running through the normal things we do at a test, and it’s responding well. It’s going to be a good middle series car.”

Balash told Sirius Speedway Tuesday that the test could hardly have gone better, saying, “This is a new project, so there’s an unknown until you get it to the racetrack. Now, we have it at the track, and it’s been very well-received.”

Vice President of Competition Robin Pemberton agreed, saying, “Speaking to some of the drivers, the input I got was the car was very good. A couple actually said they wished they could race this new car tomorrow.” Pemberton said the new design includes all of the safety features found in the Sprint Cup version, utilizing the same chassis and 85 to 90% of the same suspension pieces. The main differences lie in a smaller front splitter, a rear spoiler (in place of a Cup-style wing) and different bodies. 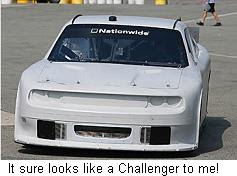 Only Toyota has officially announced a body style for the new car; saying that it will utilize the battle-tested Camry. Unconfirmed reports say that Chevrolet will utilize its Malibu body, with Ford running the Taurus, and Dodge going with its new muscle car, the Challenger. Photos of the Ford, Chevy and Toyota entries at Richmond are fairly nondescript, but Ganassi Racing’s Dodge COT has a distinct nose that heavily favors the Challenger.

“We’re still walking down the path of certifying the bodies for the cars in the Nationwide Series,” cautioned Balash. “The manufacturers haven’t made their official announcements yet on what body styles they’ll have, once we get to the race track.”

He stressed that while this week’s results are encouraging, there is more testing to be done, specifically on larger tracks. To that end, the Nationwide Series COT will test next at Lowe’s Motor Speedway Oct. 13-14.

NASCAR will reportedly implement the new car in 2010, giving teams 17 months to covert their fleets.
Posted by Dave Moody at 12:10 PM