Suspended officials Tim Knox and Bud Moore have reportedly been dismissed by NASCAR. The two were suspended following an investigation into a $225 million sexual harassment and racial discrimination lawsuit filed by former official Mauricia Grant. Knox and Moore were accused in the suit of exposing themselves to Mauricia Grant. NASCAR has denied Grant's allegations.

Another former technical inspector has filed a complaint against NASCAR with the Equal Employment Opportunity Commission, alleging racial discrimination, a hostile work environment and wrongful termination. Dean Duckett, who is also black, told The Associated Press Saturday that he will consider filing a lawsuit of his own if NASCAR refuses to give him his job back. Duckett was fired in November of 2007 after a heated argument in which he told another official, "I ought to cut you.” He was also accused in Grant's lawsuit of dumping water on another female official to simulate a wet T-shirt contest, a charge he denies.

Random drug testing will be the law of the land in NASCAR beginning in 2009. All drivers in the three national series -- Sprint Cup, Nationwide and Trucks -- must now be tested prior to the start of next season, and team owners must verify that all licensed crewmembers have been tested by a certified lab. NASCAR will also test all its officials prior to the start of the 2009 season.

In short, everyone -- drivers, over-the-wall crewmembers and officials – will be subject to random tests throughout the season; a major improvement over the previous NASCAR policy, which allowed testing only in cases where "reasonable suspicion" existed. Penalties will continue to include immediate suspension from competition, and a possible lifetime ban for a first violation. Third-time violators will automatically receive in a lifetime ban. 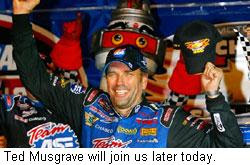 Musgrave wrecked the team's primary truck in the opening laps of practice Saturday, and reportedly exchanged harsh words with team owner Jim Harris immediately after. He told MRN Radio, "I'm sick of driving bottom of the barrel (trucks). I'm not going to do it anymore."

Harris tabbed veteran Stacy Compton to drive the No. 59 Saturday night, and said a decision on who will drive for the rest of the season will be made later this week. Musgrave will join us on Sirius Speedway Monday to discuss the situation.

Keselowski Goes Kup: Brad Keselowski will make his NASCAR Sprint Cup Series debut at Lowe's Motor Speedway on October 11th, driving for Hendrick Motorsports. Keselowski will attempt to qualify a fifth Hendrick entry -- the No. 25 GoDaddy.com Chevrolet -- for the race, and also the November 2 Dickies 500 at Texas Motor Speedway. He is currently third in NASCAR Nationwide Series championship points, with two wins, 10 Top-5 and 16 Top-10 finishes for JR Motorsports.

Texas Terry To Kansas: Petty Enterprises Vice President of Race Operations Robbie Loomis said Sunday that the team is seriously considering putting former Spring Cup champion Terry Labonte in the #45 Dodge at Talladega. Loomis said Kyle Petty will drive this weekend in Kansas, with Chad McCumbee taking the wheel at Lowe's Motor Speedway. McCumbee is expected to drive in four or five more races this season, as the team attempts to settle on a driver lineup for next year.

In a related story, Loomis said he is not interested leaving Petty Enterprises to take a similar position with the new Stewart-Haas Racing Team next season.

And Finally: Published reports this weekend said that A.J. Allmendinger may have driven his final race for Red Bull Racing. He was reportedly told last Wednesday that he will not return to the team in 2009, replaced by Scott Speed. Yahoo Sports reported today that he may give way to veteran Mike Skinner this weekend at Kansas Speedway, with Speed running at least some of the remaining races this season. Allmendinger is reportedly close to signing a new deal with Chip Ganassi Racing with Felix Sabates, to drive the #41 Target Dodge in 2009.
Posted by Dave Moody at 1:52 PM