Lowe's Motor Speedway owner Bruton Smith chastized the City of Concord and Cabarrus County yesterday, saying city and county officials are attempting to weasel out of a deal they made to pay him more than $80 million in incentives to keep the track in Concord and upgrade the facility.

Smith says the deal requires that he be compensated for major road improvements around Lowe’s Motor Speedway within two to three years. But local officials said recently that they may need as much as 40 years to pay him back, a timetable Smith said claims was never discussed.

He called anyone advocating a 40-year payback plan “a liar and a cheat,” adding “somebody in Concord is trying to undo what they agreed to. I'm being the victim all over again, (and) we're not going to remotely consider anything other than two to three years.”

As a result of the latest dispute, Smith said he may not undertake a promised $200 million in upgrades to the speedway, after all. He also said his lawyers are investigating possible fraud, while declining to give specifics.

Cabarrus County Commission Chairman Jay White said Smith is being unreasonable, adding, “To expect the city and county to pay that amount of money in a two to three-year period is unheard of. I certainly didn't obligate the county for that amount for that period of time.”

Smith's latest dustup is not the only racing-related item on the financial page this week, after reports surfaced that the price tag for NASCAR’s new Hall of Fame is on the rise. 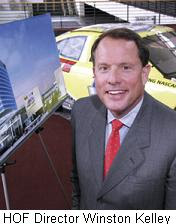 Planners presented a proposal to Charlotte City Council yesterday, requesting an extra $32-million for better exhibits, increased energy efficiency and unexpected increases in construction costs. If approved, the new cost of the project would top $195 million; to be paid for with a combination of hospitality taxes, loans and money generated by land sales.

The council is set to vote on the request later this month, but several members criticized the increase yesterday, questioning how the original cost estimates could have been so far off. In addition, some council members say that the Hall’s other partners -- Bank of America, Wachovia and NASCAR – should do their share to help cover the overrun. The Hall’s Executive Director, Winston Kelley, said $17 million of the additional $32 million will go toward more interactive displays and exhibits, making the Hall more attractive to fans.
Posted by Dave Moody at 2:21 PM