NASCAR Sprint Cup Series Director John Darby will be transferred to a managerial position at the sanctioning body’s Research and Development Center as soon as his replacement can be chosen and trained. 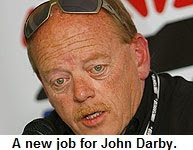 The move comes as a surprise, but was confirmed by multiple sources today who spoke on the condition of anonymity. NASCAR is expected to officially announce Darby’s transfer tomorrow, during its portion of the sport’s annual Media Tour. No timetable has been set for selecting his replacement, and sources tell Sirius Speedway that Darby will continue in his former post until a replacement is hired and trained.

Darby began his career as a race official in 1982, becoming Technical Director of NASCAR’s now-defunct Sportsman division in 1989 before overseeing the NASCAR Busch Series for three seasons. He replaced Gary Nelson as Director of what is now the NASCAR Sprint Cup Series following the conclusion of the 2001 campaign. He was tasked with overseeing all aspects of the series’ rules, technical inspections and enforcement.

Two Rides For Gilliland: BAM Racing announced today that David Gilliland will drive their #49 Toyota in this year’s Daytona 500, with sponsorship front Warner Music Nashville and Larry the Cable Guy.

BAM also announced recently that they have entered into a technical alliance with Robby Gordon Motorsports that will see RGM provide them with cars, equipment and personnel support.

In addition, Gilliland will drive a third entry out of the Front Row Motorsports Sprint Cup stable this season, sharing the #38 Ford with Robert Richardson Jr. Gilliland will reportedly steer the car in a majority of events, joining teammates Travis Kvapil and Kevin Conway.

Buschs Re-Up: Joe Gibbs Racing has signed Kyle Busch to a new, multi-year contract that will keep Busch in JGR equipment for the next several years. Exact terms of the signing were not revealed, but team President JD Gibbs described the length of the pact as “less than seven” years. Busch’s current contract was set to expire at the end of the 2010 season.

Penske Racing has exercised an option on big brother Kurt Busch's contract for the 2011 season, as well. Busch will still be allowed to talk to other teams about 2011 and beyond, but Penske has the right to match any offer. Team owner Roger Penske said yesterday that he intends to keep the 2004 Sprint Cup champion in his Dodges for many years to come, and Busch said he hopes to hammer out a long-term pact with the team.

Penske Racing also announced that Ruby Tuesday restaurants will sponsor Brad Keselowski’s #22 NASCAR Nationwide Series Dodges next season, serving as primary sponsor for six races and as an associate in the others. Ruby Tuesday is expected to debut as a primary sponsor on April 30 at Richmond International Raceway.
Posted by Dave Moody at 1:07 PM