Good Times (Except For Jimmy) At Rockingham's Polar Bear 150

The Sirius Speedway gang (well, most of them) made a New Year's Day pilgrimage to Andy Hillenburg's Rockingham Speedway Friday for the 2010 running of the "Polar Bear 150." The day dawned chilly -- and stayed that way -- but the racing was red-hot, as Chuck Barnes held off a last-lap challenge from Brett Hudson to win the 150-lap event for the second year in a row. Will Kimmel finished third, with Frank Kimmel II and Chad Hall completing the Top Five. 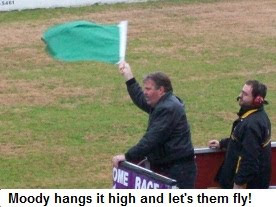 The Frank Kimmel Street Stock Nationals event was a thriller from start to finish, with 18 official lead changes and 12 caution flags, including a pair of red-flag stoppages for multi-car pileups. Jimmy Elledge's Sirius Speedway/L&M Construction #81 Chevrolet qualified tenth for the main event, but fell back slightly after the race's Grand Marshall, Sirius Speedway host Dave Moody put the field under green.

Elledge brought his extremely loose race car back from the brink of disaster a handful of times in the opening laps, before finally spinning in Turn Three on lap 44. A number of drivers took evasive action before Elledge's pristine Monte Carlo took a hard hit to the nose that sent him behind the wall for the remainder of the day.

“It’s my fault," said Elledge afterward. "I was being stupid and driving too hard. The car was way too loose, and I was trying to get to halfway to get it tightened up. Unfortunately, I was faster than the guy in front of me and couldn't resist going for the spot. When I got below him, he drove in on the outside of me and forced me to the bottom of the racetrack. I was WAY too loose on the bottom, and it got away from me.

"I spun out and wrecked. It was nobody’s fault but mine.”

Despite pacing Thursday's lone practice session, qualifying on the pole and capturing the checkered flag in the main event, winner Barnes admitted in Victory Lane that he did not have the fastest car. 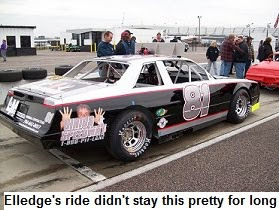 “We had a good car, not the fastest,” he said. "Brett Hudson is a good driver and had the fastest car, I think. These cars are a whole lot better when they’re out front, and somehow I managed to stay in front of him after the last restart. He drove me clean, and he deserved to win because he had a better car.”

Attrition was high, with a pair of six-car crashes among the 12 caution periods. Only nine cars were able to finish on the lead lap, and nearly a third of the 68-car starting field was in the garage by the halfway point.

Thanks to Andy Hillenburg and his staff for providing a great start to the 2010 racing season. See you next year!
Posted by Dave Moody at 2:54 PM