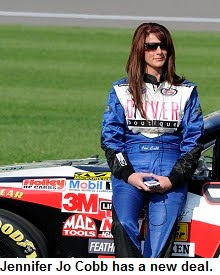 Circle Bar announced plans to liquidate its #10 operation and focus solely on Rick Crawford’s #14 in 2010, and sources tell Sirius NASCAR Radio’s Sirius Speedway with Dave Moody that Cobb has secured sufficient sponsorship to purchase those trucks and equipment. Cobb placed a deposit on the operation last week, with payment expected to be completed later today.

“I put together a group of investors intending to run a limited number of fully funded races with top-shelf equipment,” said Cobb in an exclusive Sirius Speedway interview. “But when I walked into Circle Bar Racing and saw what great equipment they had, I flashed back to all the money I’ve spent over the years. I looked around, then went back to my investors and said, `Guys this is an incredible value.' Once they heard what was there – and for what price -- they stepped up to make it happen.”

Cobb said the decision whether to run the full season “belongs to me. It depends on how much of the money is left after we buy everything, and how much additional sponsorship we can find. I expect that we will run them all. I’m tired of going to the track hoping to make the race. I want to go to the track knowing that we have the equipment to make the race. I want my goal to be to run up front.”

Veteran NASCAR Nationwide Series driver Mike Harmon confirmed today that he will step back from his driving duties to be involved in the operation. “I’m going to run the team for them," he said. "I will still do some driving on the Nationwide and Truck Series when I can, but this new team will be my first priority. I haven’t had fun driving in a long time. It’s tough when you haven’t got the money to run well, so when this opportunity came up, I decided to take it.

"Jennifer Jo drove for me at Homestead last season, and she has driven my ARCA cars before. There’s a lot of trust there, and I’m looking forward to working with her.”

Cobb said she will also compete in the ARCA season-opener at Daytona, and will also run a limited number of Nationwide Series events.
Posted by Dave Moody at 12:58 PM