Nearly two decades ago, Evernham needed a place to stay while his year-old son, Ray J, was treated for leukemia at New York’s Sloan-Kettering Hospital. Ronald McDonald House gave him and his family a home away from home and a sense of comfort that he has never forgotten.

"I can't explain what it means to be so lost in a town with a sick child," he said. "Parents will find comfort within these walls. It's important that Ronald McDonald House of Charlotte gets built and used."

Evernham recently made a $250,000 donation to the cause, and also agreed to serve on the charity's executive board. His pledge pushed donations past the $6-million mark, but the fundraising drive is running behind projections, and is well short of its $9-million goal. "This is something I have to do," said Evernham. "You don't let things like this go by without getting involved."

Sirius Speedway has set a goal of $5,000 in listener donations. If that goal is met, host Dave Moody will join Evernham in receiving an on-air pedicure, with the color to be selected by the largest individual giver. In addition, Evernham will match listener donations up to an additional $5,000. 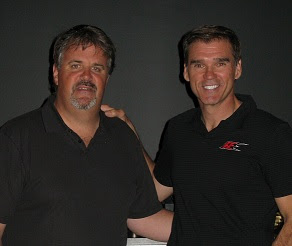 “I’m not really a pedicure kind of guy,” said Moody, who also serves as lead turn announcer for MRN Radio’s broadcasts of NASCAR Sprint Cup, Nationwide and Camping Truck Series races. “In fact, I’m not wild about people messing with my feet at all. But if that’s what it takes to help Ronald McDonald House of Charlotte get built, that’s what we’ll do. Paint my toenails pink.”

Construction is scheduled to begin next week, following a ground-breaking ceremony on Wednesday. The 35,000-square-foot facility will be built on a one-acre lot donated by Carolinas Medical Center, and will be able to house up to 28 families of sick children. Charlotte has two large children’s hospitals, and many families travel to the city to take advantage of the care provided by Carolinas HealthCare’s Levine Children’s Hospital and Presbyterian’s Hemby Children’s Hospital.

"It's overwhelming and very stressful to be here with a child in crisis, trying to figure out this city… where to stay, where to eat, where to go,” said Mona Johnson-Gibson, Executive Director of Ronald McDonald House of Charlotte. “We have to be ready to go. It won’t be long before we’re opening.”