Richmond International Raceway will erect a state-of-the-art video scoring tower complete with four giant video screens in the infield of the speedway, in time for the NASCAR Doubleheader weekend April 30-May 1. The new leaderboard and video screens will be visible from every seat in the house.

“The new leaderboard and video screens mark a major upgrade and improvement to our facility and will enhance the overall guest experience at America’s Premier Short Track,” said track president Doug Fritz. "Looking at surveys, fan emails and comments, our fans asked for a new leaderboard to replace the current model in the infield." 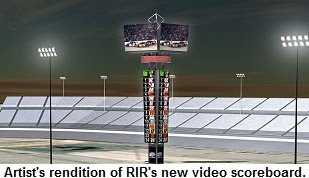 Designed by Panasonic, the structure will stand 130 feet tall, topped by four LED video screens. At 130-feet high, it will be the tallest in motorsports. Each screen will measure 38-feet wide by 24-feet high, and the four-sided design will provide spectacular views of the video, including live race action, to fans all around the speedway. They will display live race action, highlights and replays, pre-produced videos and other animation and graphics.

Below the video screens, a 67'x13' four-sided LED leaderboard will provide real-time running order, lap times, points standings, and current Chase standings during the final regular-season race of the 2010 campaign.

NASCAR returns to Richmond International Raceway for the "Crown Royal Presents The Your Name Here 400" NASCAR Sprint Cup Series race, under the lights on Saturday, May 1. The doubleheader weekend kicks off on Friday, April 30 with the NASCAR Nationwide Series 250.
Posted by Dave Moody at 1:09 PM