Michael Waltrip said late yesterday that he is talking with team owner Billy Ballew about driving one of Ballew’s Camping World Trucks in a number of races this season. 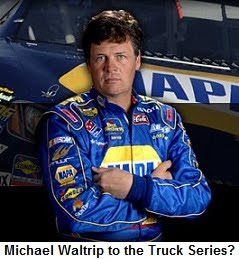 SceneDaily.com reports that the possibility exists for Waltrip to run the full 2010 Truck schedule with Ballew if sponsorship can be found, but Waltrip has downplayed that possibility. Ballew said he hopes to make an announcement within the next 10 days, involving both Waltrip and his other driver, Aric Amirola. He also revealed that Steve Wallace is also being considered for a part-time Truck Series schedule with the team, in addition to his full-time Nationwide ride with Rusty Wallace Racing.

"We were obviously surprised when Eric Phillips left," said RMM co-owner David Dollar in announcing the move. "He had been at Randy Moss Motorsports for a long time and was a big part of this organization. That said, we feel extremely fortunate to have found someone of Gene’s caliber to take over. I talked to several candidates who are really talented racers and would have done a great job. But ultimately, we felt like Gene was the guy who would be the right fit for this team. I definitely think the Nead/Skinner pairing will be a force to be reckoned with, right from the start."

Mike Skinner will join us at 6 p.m. ET Tuesday to talk about the move.

Kidd has spent the last four years in the engineering department at Richard Petty Motorsports, and previously worked as race engineer on Elliott Sadler’s #19 RPM Dodge. Joey Logano, Denny Hamlin and youngster Matt DiBenedetto are all expected to drive the #20 car on a part-time basis this season, with sponsorship from GameStop, Interstate Batteries, SportClips, and Pizza Ranch.
Posted by Dave Moody at 2:00 PM