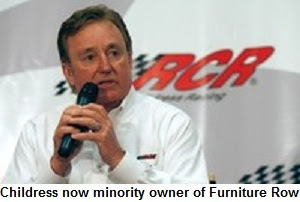 “That is a huge part of the deal for us,” he said. “This is not a smokescreen. Richard Childress will become a minority owner of Furniture Row Racing.” Under the arrangement, Furniture Row’s #78 Chevrolet will use 2009 owner points accrued by RCR’s #07 Chevrolet to lock Regan Smith into the first five races of this season.

“That changes everything,” said Garone. “The mindset you have when you go to the track is totally different. We no longer have to worry about qualify, and now, we won’t be behind the eight-ball when it comes to race day.”

Garone said the details of the technical alliance are not fully ironed out at present, but will give the team a major boost in engineering. “As a single car team, we have needed this for quite some time,” he said. “I can’t really tell you much about the specifics right now, because they haven’t been finalized. It could ultimately involve a lot of things.” 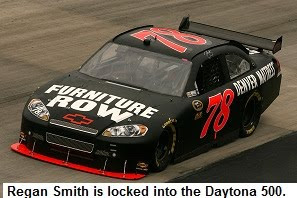 He confirmed that the team will not utilize Earnhardt-Childress Racing Engines, choosing instead to continue their relationship with Hendrick Engines. Furniture Row will once again contact with Kevin Harvick, Inc., for over-the-wall pitcrew services this season.

"Our hope in 2009 was to be better prepared by racing less, and it actually did work,” said Garone. “We had more time to get our cars together, and it paid off for a time. Halfway through the season, though, not being there every week began to catch up to us. We fell behind. The road crew never really got into a rhythm. When you’ve been gone for three weeks, it’s almost like having to re-learn everything.

“This year, we’re going to be right there every week.”
Posted by Dave Moody at 7:00 PM