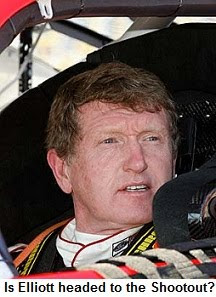 Elliott ran a partial schedule with Wood Brothers Racing in 2009, and is expected to do so again this season beginning with the season-opening Daytona 500. The Woods have no plans to compete in the Bud Shootout, however, leaving Elliott free to drive for another team.

Ragan is not eligible for the race, while Elliott qualifies as a former Sprint Cup, Daytona 500, Coke Zero 400 and Budweiser Shootout champion. The deal is reportedly not yet complete, but awaits only the approval of sponsor UPS.

A spokesperson for Roush-Fenway Racing declined to comment on the story this afternoon.

Sirius Speedway has also learned that Kenny Schrader will drive the #82 Red Bull Toyota in the February 6 Budweiser Shootout at Daytona. Sources close to the team say that negotiations have taken place to put Schrader in the car usually driven by Scott Scott, based on Schrader's eligibility as a former Bud Shootout winner.
Posted by Dave Moody at 1:54 PM