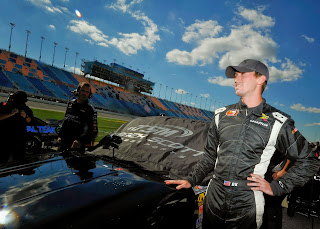 Turner Scott Motorsports has announced the addition of Ben Kennedy to its 2014 NASCAR Camping World Truck Series roster. The 21-year-old will drive a full-time championship campaign while competing for Sunoco Rookie of the Year honors behind the wheel of the No. 31 Chevrolet Silverado. Michael Shelton, who led the No. 31 team to TSM's first championship in 2012 with driver James Buescher, will continue his role atop the pit box. Kennedy made his NCWTS debut for TSM in 2013, earning a best finish of fourth at Martinsville Speedway.


Kennedy, who began his racing career on the short tracks of central Florida, has Pro-Truck championship titles at both Orlando Speedworld and New Smyrna Speedway, which he earned in 2009, followed by the Super Late Model championship at Orlando Speedworld in 2010. The great grandson of NASCAR founder Bill France, Sr., Kennedy made his touring series debut in the NASCAR K&N Pro Series East in 2010. Kennedy began racing full time in the NKNPSE in 2011. In 2012, Kennedy competed in the first NASCAR-sanctioned Euro Racecar Series event, winning the event at Tours Speedway, the first NASCAR race held on an oval in Europe. Kennedy experienced his most successful NKNPSE season to date in 2013, finishing fourth in the Driver Point Standings on the strength of two wins, one pole, three Top-5 and nine Top-10 finishes in addition to being crowned as the series' Most Popular Driver. Kennedy was selected for the NASCAR Next program in 2013, an initiative to spotlight the sport's up-and-coming stars. The Daytona Beach, Fla. native is also completing his Sports Management degree at the University of Florida.
"I'm really excited about the opportunity to be in Turner Scott Motorsports' No. 31 truck for 2014 and to be able to work alongside Michael Shelton and a very talented crew," said Kennedy. "It will be a great year and I hope to really learn a lot in the series and compete for wins and Rookie of the Year. It's going to be a blast to work with such great people; I can't thank everyone I've worked with in the past enough for getting me to this point in my career. A big 'thank you' to all my fans for always sticking behind me."
Turner Scott Motorsports has earned two championships in the last two seasons, beginning in 2012 with Buescher's NCWTS title. TSM captured the NKNPSE championship in 2013 with Dylan Kwasniewski behind the wheel. In 2013, TSM's Truck Series program totaled four wins, 10 poles, and finished the season with all three of its full-time trucks in the Top 10 for the second-consecutive season.
"We are very excited to have Ben [Kennedy] running full time for us in the Truck Series," said team co-owner Harry Scott Jr. "I believe we all have seen his potential over the last few years and we're looking forward to seeing all that he can accomplish while running for us full time. He's an impressive young man who is not only a talented racer, but also very smart and very driven. Turner Scott Motorsports has always been about developing talent for the future of our sport, and Ben is very representative of that. I know that everyone in our organization, especially the No. 31 crew, is looking forward to working with Ben and having a very successful year."
Posted by Dave Moody at 12:20 PM