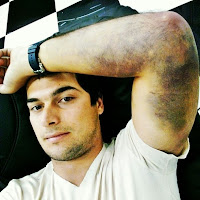 NASCAR Nationwide Series driver Nelson Piquet, Jr. suffered a badly bruised arm in a recent karting crash. The injury is not expected to impact his availability for the 2014 season, and Piquet should be fully recovered in time for SpeedWeeks 2014 at Daytona International Speedway.


The second-generation driver posted a photo of the injury on his Instagram account, before returning to his home in Brasilia, Brazil for the holidays. He was unavailable for comment today.
Piquet struggled in his inaugural season of NASCAR Nationwide Series competition with Turner Motorsports, managing five Top-10 finishes in 33 starts en route to a 12th-place finish in the championship standings. His best finish was an eighth in the Feed The Children 300 at Kentucky Speedway in late June.
No announcement has been made regarding his plans for the 2014 season.
Posted by Dave Moody at 11:07 AM