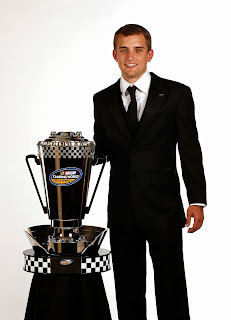 
Buescher finished third in the Truck Series championship standings last season, with a pair of wins at Michigan and Iowa, four Top-5 and 14 Top-10 finishes. Both RAB and Turner Scott field full-time Nationwide Series teams, but Buescher said RAB’s strong ties to Toyota and the Toyota Racing Development engine program offer him a better career path.
“There are a lot of reasons to make this move,” said Buescher on Sirius XM NASCAR Radio’s Sirius XM Speedway, “but the support RAB Racing gets from Toyota was the biggest factor in my decision. The opportunity arose for me to sign a new, multi-year Nationwide Series deal with RAB Racing, with a better path to a potential Sprint Cup Series ride than I’ve ever had before.”
Turner Scott Motorsports is owned in part by Buescher’s father-in-law, Steve Turner, and the former Truck Series champion said all parties worked diligently to separate business from family.
“Was it complicated? Yes and no,” he said. “It’s hard when you’re tied-in with family, but everyone knew it was coming sooner or later. Turner Scott Motorsports does not have a Sprint Cup Series team, and everyone knows that my ultimate goal is to be a Cup Series driver one day.
“Everyone is fine with this decision and agrees it’s the best opportunity for me to take the next step in my career."

Turner also commented on the move, saying, "I have always been supportive of James and I am very proud of everything that he has accomplished while driving for our team. I am excited for James and his new opportunities, and everyone at TSM would like to wish him the best in his future endeavors. I will always continue to support him and cheer him on as a member of my family, but his departure from Turner Scott Motorsports does not change the passion I have for this team. I love racing and have no plans to diminish my role as a co-owner of our organization. I am looking forward to a successful season in 2014 with a very strong lineup of drivers."

An announcement on sponsorship for Buescher's new team is expected in the near future.