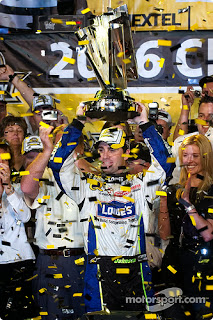 As part of the revamped Glory Road set to debut Saturday, Jan. 11, the NASCAR Hall of Fame announced the fifth of nine historic machines to be included in the exhibit. The 2006 No. 48 Lowe's Chevrolet Monte Carlo SS driven by Jimmie Johnson to the first of his six Sprint Cup Series championships will join 18 other cars that will comprise the exhibit. The reveal took place online via a video message from Jimmie Johnson on the NASCAR Hall of Fame's Facebook, Twitter and Instagram pages.


Johnson drove the 2006 No. 48 Lowe’s Chevrolet Monte Carlo SS at Homestead-Miami Speedway in the final race of the season on Nov. 19, 2006, capturing his first of six championship titles. He came to the Ford 400 with a 63-point lead over Matt Kenseth. Johnson started the race in fifteenth and had a conservative run only leading for two laps of the race. He finished ninth and beat Kenseth for the championship title by 56 points. The championship capped a 2006 season that included five wins and 24 Top-10 finishes in his 36 starts.

He was virtually unstoppable during the next four seasons, as well, racking up five consecutive championships. With the help of crew chief Chad Knaus and team owner Rick Hendrick, Johnson found Victory Lane a total of 66 times, beginning with his first win in 2002. On Nov. 17, 2013, Johnson won his sixth NASCAR Sprint Cup Series championship in the last eight years, an unprecedented achievement in the history of NASCAR.
Glory Road, which features 18 historic stock cars encircling the Great Hall, has served as one of the Hall’s most prominent focal points since opening. Speedways from across the country are illustrated here as well, where guests can touch the texture of various tracks and feel the intense banking that drivers face week-to-week. Glory Road 2.0 will see 18 new cars that reflect the six generations of premier series race cars that have been driven and built by some of the sport’s most celebrated drivers, owners and mechanics.
To mark this major exhibit revamp, the Hall will provide an exclusive sneak peek of artifacts in the coming weeks via in-person and social media unveils. The nine debuts will culminate with a behind-the-scenes media preview of all 18 cars in January. Prior to each Glory Road 2.0 announcement, stay tuned to the NASCAR Hall of Fame on nascarhall.com, Facebook, Twitter and Instagram for sneak peeks at the other cars scheduled to find a new home in this exhibit.
Already announced as part of the Glory Road 2.0 lineup are Buck Baker's "Black Widow"1957 Chevrolet, Jeff Gordon's 1994 Chevrolet Lumina, Tony Stewart's 2011 Chevrolet Impala and Ned Jarrett's 1966 Ford Fairlane.
Posted by Dave Moody at 5:17 PM