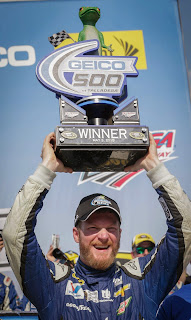 Dale Earnhardt, Jr. returned to Victory Lane Sunday at the track he loves most, driving his electric blue, Nationwide Insurance-sponsored Chevrolet to a 0.159-second victory over teammate Jimmie Johnson in the GEICO 500 at Talladega Superspeedway Sunday. The win virtually ensured that Earnhardt will be a part of the 2015 Chase For the NASCAR Sprint Cup, and triggered a raucous, post-race celebration in the Talladega grandstands and across Earnhardt Nation.

Earnhardt’s victory came just hours after he admitted to being “ashamed” by his decision to lay back and not challenge for the win last season, preferring instead to save his race car and avoid a possible late-race crash.

"I was real ashamed of that choice,” said Earnhardt. “I felt like I wasted my team's time and everybody's hard work. So I got a run up in there (today). If I wreck, we're in the middle of it. We're going to be racing for the lead, or trying to anyway. That's my mentality until I don't race anymore.”

Earnhardt was a good as his word Sunday, leading 67 of 188 laps and racing in the lead draft virtually every step of the way. When his pursuers proved reluctant to mix it up in an attempt to wrestle the lead away in the final laps, the leader of Junior Nation found himself in the catbird seat, driving his preferred high line all the way to an emotional Victory Lane celebration.
“I feel like I’m supposed to get up there and lead,” said Earnhardt afterward. “The fans want to see us up front. They get excited when we take the lead (and) they're happy when we're up front. I feel that. When you get up there and get the lead, you know you're delivering upon the promise that you're going to run hard and run good." 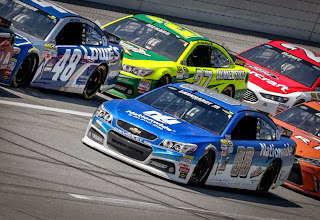 Earnhardt also invoked the memory of his late father, who earned his final Sprint Cup victory with a thunderous five-lap drive from 18th to Victory Lane in October of 2001. Earnhardt, Sr. claimed 10 of his 76 career checkered flags at Talladega. Junior now has six victories – one quarter of his career total – at the Alabama speedplant; a fact that is not lost on NASCAR’s perennial Most Popular Driver.
"We have a lot of supporters here because of dad's success," said Earnhardt Sunday. "He won so many races here. I love when we go to Victory Lane because I feel like I add to his legacy. All I ever want to do is make him proud. I feel like when we win at the tracks where he was successful, that's exactly what we're doing.
“I haven’t won here in a long time,” he admitted. “My daddy’s birthday was a couple of days ago. I don't really get to think about him that much, (and) his birthday came and went. Today made me think about his birthday, how much I miss him and how much he meant to me. It was real emotional. Everything is so good for me right now.

“I don’t know why, I don’t feel like I deserve it. I just feel overcome with a lot of emotion.”

Faced with the daunting task of measuring up to a legend, the driver known simply as “Junior” has often struggled to find comfort in his father’s considerable shadow. But on Sunday – at least for a while – Earnhardt the younger was at peace, with both himself and his legacy.

As he passed beneath the checkered flag Sunday, Earnhardt uttered just one-word over his in-car radio.
"Celebrate!"
His Hendrick Motorsports team happily complied, as did a nearly packed grandstand of Talladega faithful. The party raged long into the night, as Earnhardt Nation welcomed their driver to the 2015 Chase with a simultaneous celebration of what was, what is, and what may be, come the month of November at Homestead Miami Speedway.
Posted by Dave Moody at 10:26 AM