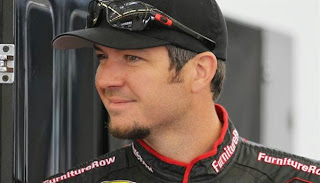 For the second time in the last three weeks, it was “close, but no cigar” for Martin Truex Jr. and Furniture Row Racing at Charlotte Motor Speedway

Just like at Kansas Speedway two weeks ago, Truex was the dominant driver in Sunday’s Coca-Cola 600, leading a race-high 131 of 200 laps and appearing to have the race in hand before falling victim to ill-timed late caution flags that turned NASCAR’s longest race into a fuel mileage battle.

Truex was forced to relinquish the lead just 22 laps from pay dirt, heading to pit road and handing the top spot to Kevin Harvick. Harvick pitted a lap later, with Carl Edwards taking command and maintain the lead for the final 21 circuits en route to his first win of 2015.

Truex slashed his way back through the field to finish an impressive fifth; but saw no reason to smile about his fourth Top-5 showing of the season.

“I thought we had it,” radioed Truex to crew chief Cole Pearn as the checkered flag fell.

“I didn’t even know those guys could make it on gas,” he admitted later. “I didn’t know what was going on. We had a great car. We had a chance at (winning) and it stinks to come up short like that on fuel mileage. I’ve never – not once in my whole career -- gained positions on those deals.

“I don’t know what I have to do to catch a break.”

After a dominant night in Charlotte, Truex now has led 258 total laps this season. That’s exactly 257 more than he managed in all of 2014, and Sunday marked the New Jersey native’s 11th Top-10 finish in 12 starts. An average finish of 8.7 ranks him a strong second in the championship standings behind defending series champion Kevin Harvick, despite trailing Harvick by two in the win column.

“I’m proud of the guys for an awesome race car,” said Truex Sunday night. “Everybody at ECR for the engines and the RCR chassis. All my guys in Denver are putting great cars together.”

While frustrated with their inability to win, Truex and his Colorado-based team continue to hold their heads high, remaining optimistic and continuing to perform at an elite level. “Close but no cigar” is admittedly frustrating, but it’s a far sight better than a 2014 campaign that saw Truex struggle both on and off the race track.

In the last 12 months, Truex has accompanied longtime girlfriend Sherry Pollex through a ferocious battle with ovarian cancer than included radical surgery and a lengthy course of chemotherapy. On race day, he battled through a competitive slump that featured an average finish of 20.2, despite driving for a Furniture Row team that had qualified for the Chase just a year earlier with Kurt Busch at the wheel.

“It changed the way I approached my career, the way I do things,” said Truex of his 2014 trial by fire. “It opened my eyes to a lot of things I didn’t know before.”

That new approach is clearly paying off. Truex has more Top-5 and Top-10 finishes by Memorial Day 2015 than he managed in all of 2014. He and the underdog, single-car FRR team lack just one thing in their drive for a berth in the 2015 Chase for the NASCAR Sprint Cup.

“It kind of gets laughable at this point,” shrugged Pearn Sunday night. “But I’m ready to go to work at six a.m. (Monday), work all day and kick their ass next week.’’

Truex sang a similar tune, serving notice that his Furniture Row Racing team will contend for the checkered flag yet again this week at Dover International Speedway.

“I hope everybody is ready,” he warned, “because we are going to be fast.”