NASCAR officials say they took a major step toward finalizing the new "Car of Tomorrow" during a successful test yesterday at Lowe's Motor Speedway. 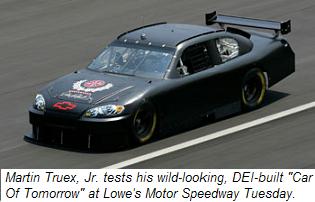 Eight drivers spent the morning in single-lap runs, before running a pair of 20-lap, side-by-side tests. The cars passed with ease and handled better in traffic than they had in an earlier test at Atlanta Motor Speedway. As a result, NASCAR Competition Director Robin Pemberton said the "Car Of Tomorrow" is now very close to what will race next season, adding, “This is pretty much it. There might be some details (changed), but if all the manufacturers get their noses submitted, we'll be close.”

Drivers Jeff Burton, Ryan Newman and Casey Mears all spoke highly of the “Car Of Tomorrow,” saying it felt similar to what they drove at Lowe’s Motor Speedway last weekend in the Coca-Cola 600. "I think there's definitely something to work with here," said Newman. "Our car was a little tight, but it was easier to pass than in the regular Cup cars. The aero push was pretty good. I think we took some pretty big steps out there today. It's aesthetically not pleasing to me, but that's not the point. It's all about the racing.“ 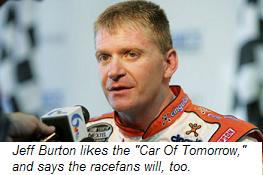 Burton also downplayed cosmetic differences between the COT and today's racers, saying, “Nobody (stayed away from) Talladega when we had wickers on the roof and Gurney lips on the spoilers. They came to see a race, and they'll do the same thing with this car. People come to watch races, not to see a car ride around a racetrack. They want to see good, competitive races.

“This car drives like a racecar – it doesn’t feel like anything unusual,” said Burton. “My first thought is that this is going to be fine. It’s not like I stepped out of something Sunday night, then came over here and got into a foreign ship. It just feels like a car.”
Mears agreed, saying, "It's a good car. I don't feel like it's much off of what we ran this weekend. The rear of the car feels lot more stable than what I had this weekend."

Four Dodges and four Chevrolets took part in yesterday’s test, with another session scheduled for today at 9 a.m. Ford teams elected not to participate, saying they will wait for NASCAR to finalize the design of the car before they resume construction. Toyota also did not take part, with officials saying they are behind in their plans to build a “Car Of Tomorrow.”
Posted by Dave Moody at 11:13 AM