Updating The News of the Day

The mainstream media is now picking up on the story we broke earlier this week; that Dale Jarrett has signed with Michael Waltrip Racing for 2007 and 2008. Waltrip reportedly offered Jarrett a two-year, $20 million contract, and the 1999 NASCAR Cup champion informed current employer Robert Yates on April 26th that he will leave when his contract expires at the end of the season.

UPS is also in the final year of its contract with Yates, and published reports say the company will remain with RYR, if Yates can sign a championship-caliber driver to replace Jarrett. However, my sources say UPS is also insisting that Jarrett be allowed to finish the season in the #88 Ford, and has threatened to withdraw their support immediately if he is replaced before the season finale at Homestead-Miami Speedway. Jarrett has 32 career Nextel Cup wins, but has finished 15th in points in each of the last two seasons, after a 26th place showing in 2003.

Jarrett’s addition gives Toyota three confirmed Nextel Cup drivers for 2007: Jarrett, Waltrip and Dave Blaney, who drives for Bill Davis Racing. Davis reportedly plans to field a second team next year, while the new Red Bull Racing team will enter two cars, with drivers still to be announced. Rumors also persist that Toyota has made Robby Gordon an offer to purchase his operation. Gordon has an existing relationship personal services contract with Red Bull, as part of his off-road racing efforts.

A group of NASCAR executives led by Robin Pemberton and David Hoots toured Montreal's Circuit Gilles Villeneuve yesterday, and while they are convinced that a Busch Series race there would be a success in terms of attendance, questions remain about the 4.361-kilometer road course’s suitability for 3,000-pound stock cars. NASCAR International Director Robbie Weiss said, "The track is fine, but we have to look at whether the barriers can stop a stock car. We want to look at the track from a safety point of view, as well as from a racing point of view." There are also questions concerning the track’s pit and garage configuration, and their ability to accommodate 43 cars and nearly 100 transporters.

NASCAR's Weiss said the group will not visit Cayuga 2000 Speedway near Hamilton, Ontario, preferring to wait until a reported sale and upgrade of the speedway are completed. The Toronto Sun reported earlier this week that a group of potential buyers has held talks with NASCAR about the project, but NASCAR’s Jim Hunter said yesterday that the sanctioning body has not spoken to anyone about Cayuga.

Here is a handy hint to use when attempting to separate speculation from fact in matters such as this. Whenever someone hypes their proposed new NASCAR-style superspeedway by claiming they have held talks with NASCAR about racing there, it's a load of crap. NASCAR does not play the "if you build it, we will come" game with speedway developers. Their tact from the beginning has been, "once it's built, then we'll talk." 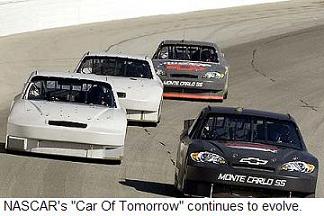 And finally, more proof (as if it's needed) that NASCAR's Car Of Tomorrow will be more like its stock, showroom brethren than the cars that are racing today. Representatives of Ford, Chevrolet, Dodge and Toyota joined NASCAR officials for a wind-tunnel session Tuesday in Marietta, Georgia, in which each manufacturer's proposed "Car Of Tomorrow" nose was put through its paces. All four manufacturers came away encouraged that they can now build even more "distinguishing features" into the panels, without creating performance issues.