There's nothing more depressing than rain at the racetrack, and when it rains on the Indianapolis Motor Speedway, it's doubly bad.

For the first time since 1983, Opening Weekend at the Brickyard passed without a polesitter being determined for "The Greatest Spectacle In Racing." Three days of virtually non-stop rain forced Indy Racing League officials to postpone qualifying until this Saturday; a full week behind schedule. Under the revised format, all 33 positions in the `500' field will be determined Saturday, allowing the remainder of the month to run according to original plans. 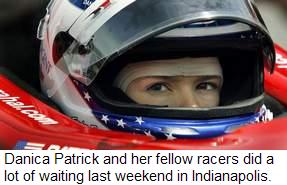 "You can't control it," moaned IRL President Brian Barnhart Sunday. "You take the situation as it's dealt to you, and make decisions based on what's in the best interest for everybody." Barnhardt and Track President Joie Chitwood initially considered bumping qualifying to Monday, but problems with staffing (apparently, you can run a massive racetrack like IMS without employees) and TV commitments -- not to mention forecasts for another three days of rain -- made the idea unworkable.

Thus, the entire Indy 500 field will be filled Saturday, in a chaotic day that will potentially feature at least 99 qualifying attempts; three each for a minimum of 33 teams. The track is closed today, with practice scheduled for tomorrow, Thursday and Friday. "Bump Day" is set for Sunday, with the field for the May 28th race locked-in at that point.

While the rain threw a proverbial monkey wrench into most teams' plans, last weekend's postponement may actually work in favor of a few low-buck operations. A handful of teams had already delayed their Indy debuts until this week, taking advantage of a cut-rate Honda engine lease program that allows them to compete only in Week Two, for about half the price of a full "Month of May" deal.

A number of teams are now poised to take advantage of that opportunity. John Andretti is rumored to have a deal afloat to run the `500' with a yet-unnamed team (tune into today's show for more on this), while Team Leader Motorsports owners Greg Beck and Kent Baker will field a team car to Stephan Gregoire's entry, with P.J. Jones at the wheel. Old friend Davey Hamilton is also rumored to be in line for a second Eddie Cheever Racing seat; his first IndyCar start since that horrifying crash at Texas in June of 2001.

Those late arrivals can -- theoretically at least -- make a run for the Indianapolis 500 pole, if they can overcome a severe lack of testing and practice time. Most likely, however, the pole will be decided between Chip Ganassi Racing's Dan Wheldon, and Marlboro Team Penske teammates Sam Hornish, Jr., and Helio Castroneves. Hornish has been the fastest man on the property all month, but Wheldon stole his spot at the top of the speed charts in a brief, rain-free period Sunday, ripping off a lap of 228.663 mph -- nearly two mph faster than Hornish's previous best. Hornish also improved to 228.220 in the session, and expressed little concern with Wheldon's sudden burst of speed, saying, "He was (drafting) us. That's OK. We know what we're capable of doing by ourselves."

The ever-confident Wheldon disagreed, saying, "The way we've gone about qualifying differs from Penske. I think it'll be a race for the pole."

It's shaping up to be an interesting few days in Indianapolis, especially if you put any stock in rumors of a reunification announcement by Indy Racing League CEO Tony George and Champ Car World Series co-owner Kevin Kalkhoven. The railbirds say the announcement -- if it comes -- is scheduled for the week before the `500' itself.
Posted by Dave Moody at 11:16 AM