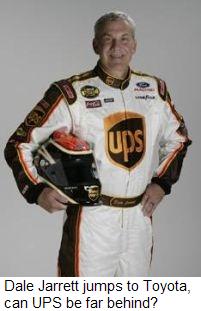 It's official. To the surprise of virtually no one, Michael Waltrip announced Saturday that former NASCAR Nextel Cup champion Dale Jarrett will join Michael Waltrip Racing next season, driving a Toyota Camry.

Waltrip made the announcement, saying, "We've signed Dale Jarrett to drive our Toyotas in '07 and '08, and we're real proud to have Dale on board. He's a wonderful ambassador to the sport, and he fits perfectly with what we're building, and what we're doing. We believe he can win us some races, and give us a lot of direction and guidance with a new startup team and a new manufacturer. (It) will be a real asset to have his knowledge, experience and ability on our team, directing our path for us."

Jarrett said money was not the main factor in his decision to make the move, adding, "The biggest thing is the opportunity to help Michael and Toyota start something new. I saw that as a unique challenge that I wasn't going to have that opportunity to do again. I said, `That's something that I want to be a part of.' It's nothing against Robert and Doug Yates and everybody there. They've been wonderful to me. It's just a new challenge that I needed."

Waltrip made no announcement concerning sponsorship for the new team, and sources say there is still a possibility that UPS may elect to move with Jarrett. The sponsor has reportedly given RYR a list of acceptable replacements for Jarrett, and will agree to stay on if Yates can hire one of them.

Responding to allegations of disloyalty to Yates and Ford, Jarrett said, "I've already gotten (comments) about, `Don't you have any loyalty to Robert Yates and the Ford Motor Company?' Certainly, I do. They're the reason that I'm here. But there comes a time when you have to make that decision for yourself, and this is the decision that we've made."

Robert Yates Racing General Manager Doug Yates also commented on the signing, saying the team did all it could to retain Jarrett. Yates said RYR offered to match Waltrip's offer, only to have Jarrett come back some later to say the offer had changed. Ford Motor Company officials are reportedly incensed over Jarrett's decision to join rival Toyota, since the 1999 series champion has won all but two of his 32 career Nextel Cup wins in Fords. Jarrett also owns one of the largest Ford dealerships in the country; Dale Jarrett Ford in Monroe, NC. Ford executives are reportedly now scrambling to lock-up Jarrett's teammate, Elliott Sadler, to prevent a similar exodus to the Toyota camp, reportedly with the new Red Bull Racing team.
Posted by Dave Moody at 2:52 PM