Sometimes a man's own words can come back to haunt him. Case in point? NASCAR team 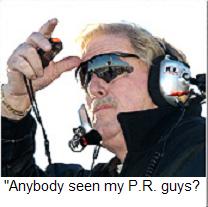 owner Robert Yates, who announced today that he will appeal the penalties handed down by NASCAR for violations discovered prior to Saturday night's race at Richmond International Raceway. Crewchief Slugger Labbe was suspended through June 7th and fined $25,000 for using an unapproved rear sway bar mount. Driver Dale Jarrett was penalized 25 driver points, and Yates himself lost 25 owner points.

Yates commented on the sanctions in a statement released by the team, saying, “Obviously, we interpreted the rules differently from NASCAR. But because of the lack of a clear-cut understanding on our part, we believe we have grounds for appeal.”

This is the same Robert Yates who was so outspoken in the aftermath of crewchief Chad Knaus’ suspension in February, suggesting that cheaters like Knaus should be banned from NASCAR. "He ought to have to go race the Talladega short track the rest of his life," said Yates. "If there is language in the rulebook covers that area, he should be gone forever. That's just stealing." Yates also said that any RYR employee caught intentionally cheating without his knowledge would be terminated immediately.

RYR General Manager Eddie D'Hondt said today that Labbe will remain with the team until his appeal can be heard by the National Stock Car Racing Commission next week. It is highly unlikely that the penalty will be overturned, since the part in question was clearly modified, with the intent to deceive. NASCAR Nextel Cup Series Director John Darby said so in an exclusive Sirius Speedway interview on Tuesday.

Thus, Robert Yates will almost certainly find himself in a tricky public relations position. His options, as I see them, are threefold. Option One is to can stick to his word and fire Labbe for intentionally cheating. Don't hold your breath for this to happen. Option Two is to admit that while Labbe did cheat, he did so with Yate's full knowledge and permission. There's not a chance in hell of THAT ever happening! Option Three is to claim (with some difficulty) that NASCAR's rules are sufficiently vague that Labbe did not intentionally cheat.

Personally, my money is on Option Three.

No matter what happens in the coming days, two things are certain. Slugger Labbe will keep cashing a paycheck, and the Robert Yates Racing PR Department will keep earning theirs.
Posted by Dave Moody at 1:44 PM