You may already have noticed the quotation marks around the words "All-Star" in the title of this entry. They are intentional.

No offense to any of the involved parties, but after Saturday night's NASCAR Nextel All-Star Challenge at Lowe's Motor Speedway, it occurrs to me that the event is less of an All-Star Race than any of the 36 points-counting events that take place each weekend, from February through November.

Was every driver in Saturday night's field an All-Star, in the strictest sense of the term? Absolutely not. Jamie McMurray, Michael Waltrip and Kyle Petty were included in the festivities (despite going a combined 0-for-recent memory) while Jeff Burton (11th in Nextel Cup points) was left out. Based on the criteria last Saturday night, EVERY race is an All-Star Race.

The main event was a bit of a dud, with Jimmie Johnson smoking the field for his 1,257th consecutive win at Lowe's Motor Speedway. Just kidding, it's only six or seven in a row. The Lowe's car wins so often at Lowe's Motor Speedway that I'm thinking about ordering a few more Black Helicopters to hold all the conspriacy theorists that are sure to come forth in coming days. The scary part? Johnson’s crewchief, Chad Knaus, said their best car was back at the shop Saturday night. Johnson, however, said Knaus will have a difficult time convincing him to bring anything different back to the track for the Coca-Cola 600.

Driver introductions for the All-Star Race were more subdued than in years past. Maybe it was the rain that kicked-up, just as the ceremonies began. More likely, though, the "hand-picked for TV" stageside crowd finally tired of being whipped into an on-camera frenzy over a bunch of anonymous catch-can operators from Mooresville, North Carolina. The least they could have done, though, was catch Ryan Newman crewman Trent Cherry, who inexplicably decided to "stage dive" into the crowd, only to have them part like the Red Sea, leaving Cherry to perform a painful belly-flop on the tarmac. 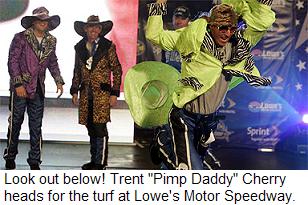 I generally try to avoid laughing at people like Cherry until I know they have survived the fall. But in this instance, I laughed like a wino at a Richard Pryor concert, only later thinking to inquire about possible life-threatening injuries.

And how about those Red Hot Chili Peppers? From my vantage point -- in Turn Two -- it seemed Bruton Smith could have spent his money on something else. The Nextel Vision screens and track P.A. system carried just one of the Peppers' three songs, pre-empting the other two for Chris Myers' FOX-TV anouncement of how many cars would be inverted for the final segment. I'm guessing that Anthony, Flea and the Gang didn't come cheap. But despite the investment, only a small percentage of the crowd got to see and hear the concert.

Most of the folks in my area weren't that all that upset about it either.

The best line of the night belonged (unintentionally) to my buddy Jeff Hammond, who alluded to the million dollar All-Star payday by saying, "We know what tonight's about -- the Presidents! Ben Franklin, Thomas Jefferson. It's about the money."

Um... Hammond? Ben Franklin was never President of the United States. But nice try, we got your point.

And finally, was it just me, or did anyone else enjoy Kyle Busch's Hulk Hogan-esque salute to the crowd during driver intros? Kyle -- admittedly not the most popular wheelman in the garage these days -- reacted to a torrent of boos from the LMS grandstands by striking a WWE caliber muscle pose (without the muscles) and cupping his hand to his ear.

It was a tremendous "F-U" -- even better than the one Tony Stewart dropped on Robbie Reiser later in the evening -- and I enjoyed the heck out of it. Racing needs more bad guys, and Shrub seems happy to play the role.
Posted by Dave Moody at 1:42 PM