Thoughts In Advance Of The Indianapolis 500

...Remind me never to have any of the people in charge of estimating the crowd count at Indianapolis Motor Speedway balance my checkbook. "Unofficial estimates" by various Indy-area media outlets pegged Saturday's qualifying crowd at anywhere from 15,000 to 20,000 fans. More reliable eyewitness accounts put the count at 10,000 -- max. That's still the best Qualifying Day turnout (by far) since IRL and CART went their separate ways back in 1996, but c'mon guys, who's fooling who?

...Unintentionally, Tony George may have hit upon a qualifying system that works for the modern-day Indy 500. Rather than dragging the process out over two full weeks -- qualifying the first 11 positions on the first weekend, followed by the rest of the field the next -- I say let's do what Mother Nature forced us to do this year; run `em all on Saturday, then finalize the field with a Sunday "Bump Day." Maybe one of these years, there will be enough cars to justify a return to two full weeks of qualifying, but right now, it's tedious, unnecessary and downright dull.

...Marco Andretti may be the real deal. The 19-year old qualified ninth Saturday; four spots better than his old man, and ahead of such Indy notables as Buddy Rice, Bryan Herta and Dario Franchitti. Maybe it IS genetic, after all. 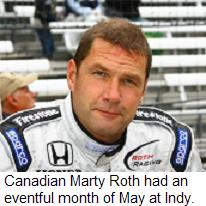 ...How happy were IRL officials to see "Mad Man" Marty Roth spin out in his final qualifying attempt Sunday? They'll never admit it, but nobody wanted to see Roth -- a nice guy who seems incapable of navigating Indy's first turn -- bump Thiago Medieros from the field, especially after three spins in as many days leading up to Sunday's festivities. He somehow managed to avoid hitting anything during those off-road excursions, until Sunday's fourth 200-mph pirouette finally put him into the wall, and out of the Indianapolis 500. As a driver, the 47-year old Roth is one hell of a car-owner, something someone should convince him of as soon as possible.

...Of all the jobs I don't want, filling two hours of Bump Day airtime on ABC with no actual bumping to talk about ranks extremely high on the list. Jack Arute and company earned their paychecks Sunday, in a big way. I wonder, though, why ABC couldn't have shown us the qualifying laps that did get turned on Saturday.

...Please don't force me to humiliate you when you call the show this week, claiming that there are 20 drivers capable of winning the Indianapolis 500. There are nine; the front six starters, plus Scott Sharp, Dario Franchitti and Bryan Herta. Any other outcome will require a horrific, multi-car crash that decimates the field, or the worst case of mass mechanical failure in the history of motorsports. None of us should be hoping for that.

...Of the 33 cars that will take the checkered flag Sunday, how many do you figure got some kind of financial assistance from Tony George to make it there? I can't prove it, but I'd be willing to bet that at least a third of the grid cashed a check from T.G. at some point this month.

...Speaking of Tony George, if he and Champ Car's Kevin Kalhoven don't find their way to the podium to make some kind of major announcement this week, there are going to be a lot of disappointed folks out there in Open Wheel-land. Count me as one of them.

...And finally, is Danica Patrick racing at Indy this year? Just checking. Based on the month she and teammate Buddy Rice have had, it now seems safe to say that the Panoz chassis officially sucks.
Posted by Dave Moody at 12:09 PM