Just when I had decided I didn't need any more reasons to dislike seven-time World Driving Champion Michael Schumacher, he gave me another.

Schumacher said last weekend that he has no idea why Juan Pablo Montoya would possibly be interested in NASCAR, saying, "Personally I wouldn't do it. What do you do in NASCAR? What is exciting? I can't see it, running around on ovals. They are heavy, low developed cars compared to Formula One. There is no challenge for me." 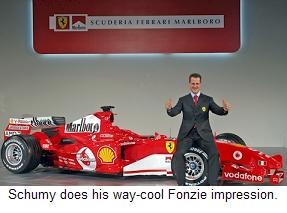 For the record, this is the same Michael Schumacher who preened in front of the cameras after "winning" the 2005 U.S. Grand Prix, when virtually everyone else pulled off the track and refused to race. The same Michael Schumacher who built his career off the ridiculous financial advantage enjoyed by his Ferrari team, and who now is getting his arrogant keester kicked by Fernando Alonso in the Formula One championship standings.

For the record, Mike. here are a dozen reasons why a few million of us prefer NASCAR to Formula One:

1) NASCAR puts on races, not parades. I can go down to the AMTRAK station and see more passing than you've got in most Formula One races.

2) In NASCAR, more than two teams have a chance to win each week.

3) With the possible exception of Michael Waltrip and Kerry Earnhardt, you can't get a ride in NASCAR by being someone's brother. Your brother Ralf can't drive nails, but he's still got a job. `Splain that one to me, Lucy.

6) NASCAR team owners have rugged, manly names like Rick, Jack and Richard. It is impossible to take anyone named Flavio seriously.

7) Speaking of Flavio Briatore, he no longer has the market cornered. Jeff Gordon is sleeping with a supermodel, too!

9) Other than at California Speedway, you cannot get a pedicure in the NASCAR garage. Can Formula One say the same? I think not.

10) NASCAR has a King (Richard Petty). The best F1 can do is Prince Rainier.