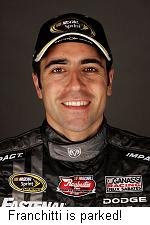 Chip Ganassi Racing with Felix Sabates announced today that due to a lack of sponsorship, it will cease operation of the No. 40 NASCAR Sprint Cup Dodge driven by Dario Franchitti, beginning this weekend in Daytona.

Team Owner Chip Ganassi announced the move, calling it, “a difficult decision for Felix and I that did not come without its share of anguish. In this tough business environment, continuing to run the car without proper funding has become increasingly difficult.”

Ganassi said he is committed to Franchitti’s continued stockcar development, and is talking with him about options for the future, including the possibility of running the balance of the season in the No. 40 Fastenal Dodge on the NASCAR Nationwide Series.

The move will reportedly have no effect on the Juan Pablo Montoya or Reed Sorenson teams.
Posted by Dave Moody at 5:36 PM