What The #@$% Happened At The Brickyard?

You've got questions, but we don't necessary have answers. At least not yet.

In the aftermath of a race at Indianapolis Motor Speedway that can best be described as a debacle, both NASCAR and Goodyear are scrambling today, trying to figure out what went so terribly wrong. For those fortunate enough to have been undergoing root canal surgery yesterday -- with or without anesthesia -- Jimmie Johnson won the AllState 400 at The Brickyard, outrunning Carl Edwards and the rest of the Sprint Cup Series pack in the final laps of a race that featured less excitement than a Girl Scout taffy pull, and more explosions than "Die Hard With A Vengeance." 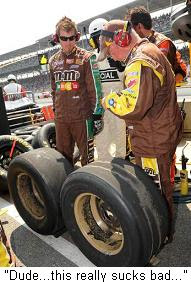 It's not the first time NASCAR and Goodyear have struggled with tires. In fact, it's not even the first time at Indy. Indianapolis Motor Speedway is similar in some ways to Atlanta, where NASCAR experienced tire trouble earlier this year. Both tracks are very fast, and extremely rough. IMS officials ground the corners of the racetrack in 2002, in an effort to improve grip for the Open Wheel Indy Cars. That made the track extremely abrasive, dramatically increasing tire wear. Fortunately, that tire wear was generally confined to practice and the early laps of the race itself. As more laps were turned, the grooves in the asphalt became filled with rubber, and tire wear improved.

Unfortunately, that did not happen this year. The question is, why?

The answer appears to lie in the interplay between NASCAR’s new racecar and the specific tire Goodyear brought to Indianapolis Motor Speedway. The new car has a much higher center of gravity, and transfers as much as 100 additional pounds to each of the right-side tires. In addition, it appears that Goodyear’s specific tire compound for Sunday’s race never allowed the track to “rubber up.” A number of teams reported that instead of producing “marbles” – chunks of rubber that wear off the tire and are ground into the asphalt – this year’s tire wore into a fine powder that failed to adhere to the racing surface.

Sirius Speedway contributor Diandra Leslie-Pelecky writes at StockCarScience.com that “the different manner in which the tread wore… suggests that there was a problem with either the nature of the tread compound used, or with the tire processing.” However, she points out that the compound used Sunday is identical to that used a year ago, when there were no major issues after the early laps of the race.

This year, NASCAR was forced to mandate a series of competition cautions every 10-11 laps. There were six competition cautions in all, forcing 52 of the race’s 160 laps – roughly one-third of the event -- to be run under the yellow flag caution. That’s a bad deal for everyone involved.

Goodyear seems to have been caught by a “perfect storm” of issues, which combined to doom Sunday’s race:

· A relatively flat track, with high speeds and an extremely abrasive surface.
· A new car with a comparatively high roll center that put added stress on right-side tires.
· A tire compound and construction that is used at no other track but Indy.
· A pre-race tire test that included only three cars, instead of a full-bore, open test.

Goodyear Director of Race Tire Sales Greg Stucker stated the obvious after the race, saying, “The tread wear didn't improve as we thought it would over the course of the afternoon. We don't have the answer as to why that didn't happen, so we've got to go back …and try to figure out how to make it better. I don't think anyone likes to race like this — us included. We're going to try to figure out what we need to do to make it better."

Clearly, Goodyear misjudged the amount of stress that the new car would place on right-side tires. NASCAR erred as well, by electing to conduct only a three-car tire test in advance of the race. That two-day April test -- involving drivers Kurt Busch, Brian Vickers and Dale Earnhardt Jr. -- clearly did not provide Goodyear engineers with sufficient data to build an acceptable tire for Sunday’s race; a mistake that will certainly be addressed before the NASCAR Sprint Cup Series returns to the Brickyard next season.

That doesn’t do anything to placate fans who suffered through one of the worst races in modern memory yesterday, and it does nothing to counteract TV ratings that almost certainly plummeted as the afternoon wore on. At this point, it’s little more than crying over spilled milk. NASCAR and Goodyear will have to take their respective lumps from a disgruntled public, while making plans for a comprehensive tire test before next year’s race to prevent something like this from ever happening again.
Posted by Dave Moody at 10:54 AM