Sam Hornish Jr. said yesterday that nobody has spoken to him about moving from Penske Racing’s No. 77 Dodge to replace the departing Ryan Newman next season, and that he has no idea who will ultimately end up in the ride. Sources close to the situation continue to tell Sirius Speedway that David Stremme is the leading candidate for the ride, but whether or not those sources are correct, it seems likely that Stremme will find his way back to the Sprint Cup ranks next season, one way or another. 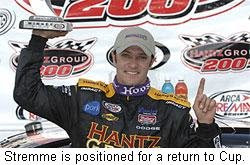 Stremme has turned down a number of offers to return to the Sprint Cup Series this season -- holding out for a ride that he feels is capable of running up front -- while serving as a test driver for Penske Racing. All three Penske drivers -- Newman, Kurt Busch and Hornish -- have praised his work, as has Penske himself.

When Dario Franchitti broke his ankle at Talladega this spring, Stremme was allowed to fill-in for only a single race, despite being offered a longer deal by Ganassi Racing. Most drivers in Stremme’s position have an “out clause” in their contract, allowing them to leave if a quality Cup ride becomes available. The lack of such a clause in Stremme’s contract – or at least his unwillingness to exercise it -- leads me to believe that he has job security at Penske that goes well beyond his current status as a test pilot.

In short, I believe that Stremme may have already received a committment from Roger Penske for a full-time Cup ride in 2009.

Yet another option for career advancement landed on Stremme’s doorstep yesterday, when an executive for ABC/ESPN confirmed that Rusty Wallace could continue as a network analyst if he moves his race team to the NASCAR Sprint Cup Series.

ESPN Vice President of Motorsports Rich Feinberg said yesterday that while the network did not allow Wallace to own a Cup team when he was first hired in 2006, the addition of team owners Ray Evernham and Brad Daugherty to the lineup has prompted a change in policy. Feinberg said, “The choice for Rusty to go into Cup racing is Rusty's, and we have relayed our position to him on that.”

Wallace has not yet commented publically on the possibility of RWI jumping to Cup in the near future. But if he does, Stremme will obviously be at the top of his list of potential drivers.
Posted by Dave Moody at 12:14 PM