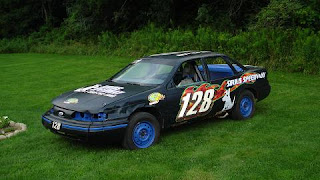 The race was truly a survival-of-the-fittest ordeal, featuring a half-hour rain storm that failed to elict a caution flag from track officials, two rollovers, a couple of small fires and more twisted sheetmetal than Kyle Busch's backyard. Gray drove a 1995 Mitsubishi Eclipse to the checkered flag, besting runnerup Rory Partlow of Northfield in a thoroughly rusted 1996 Chevy Corsica. 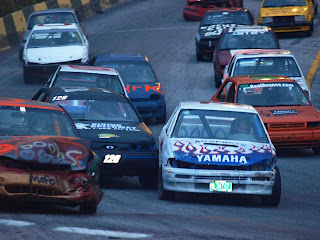 As for your humble "Godfather," he soldiered on through three flat tires, a pair of wild spins, numerous minor collisions and a sometimes-balky electrical system to unofficially finish 16th, completing 180 of the 200 laps. 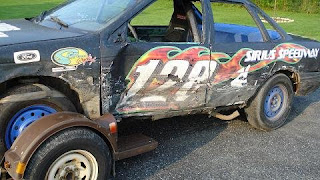 "Other than not being able to see through the oil, grease and water smeared across my windshield, dealing with an incredibly slick racetrack and dodging a few dozen homocidal maniacs, it was pretty easy," laughed Moody at race's end. "There's not much left of the car, but we drove it on the trailer at the end of the night, and that was my goal!"
Posted by Dave Moody at 11:24 AM