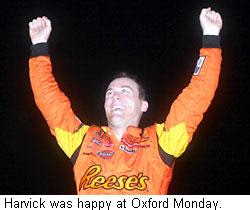 Harvick dominated the second half of the event that was postponed by rain Sunday, besting Oxford Late Model regular Glen Luce and 19-year old Joey Polewarczyk Jr. to cash a $37,200 winner’s check. He took over from early leader Eddie MacDonald on a lap 126 restart, gave the lead back by a fender six laps later, then held off a late charge by Luce to claim the win.

You can check out the complete finish by clicking HERE.

NASCAR found that Truex’s car did not fit roof templates, docking the team and driver 150 points, fining crewchief Kevin Manion $100,000, and suspending Manion and carchief Gary Putnam for six races. DEI did not contest the violations, arguing instead that the penalties were too severe. The commission disagreed, with members Russell Hackett, Jack Housby and George Silbermann ruling unanimously that the violations were “clear-cut” and that the roof was “low across a broad area”

DEI officials had no comment on the commission's ruling. They still have the right to appeal the decision to the National Stock Car Racing Commissioner, but Manion and Putnam will begin serving their suspensions this weekend at Indianapolis Motor Speedway.

Terry Continues: Kyle Petty's midseason break will be extended for at least one more week. Petty’s job as an analyst for TNT ended last weekend, but replacement driver Terry Labonte will be in the car again Sunday at the Brickyard.

Spokesmen for the team say the move is to ensure that the #45 Dodge will be in the field Sunday -- since Labonte has a Past Champion's Provisional at his disposal – and is only temporary. Petty is expected to return to the car, most likely in two weeks at Pocono. He has an average finish of 34.3 this season, while Labonte has recorded an average finish of 27.5 in his six replacement races.

More details are coming to light on Stewart-Haas Motorsports’ plans for 2009. On last night’s edition of Tony Stewart Live on Sirius NASCAR Radio last night, Stewart said there are no plans for a third – or even a fourth – car next season, saying, “right now we're going to concentrate on getting these two Cup cars exactly where they need to be… before we expand."

Published reports say that Stewart has finalized plans to drive the #14 next season, with sponsorship from Old Spice and Office Depot, with an official announcement coming Friday at Indianapolis Motor Speedway. The United States Patent and Trademark Office confirms that team General Manager Joe Custer applied for a trademark for the number on July 2nd.

ChiTown Ratings Dip: TNT's final Sprint Cup Series broadcast of the season experienced a significant drop in ratings from last season, due in part to a move from Sunday afternoon to Saturday night. The Chicagoland Speedway race received a 3.7 rating, down 23 percent from the 4.8 it received a year ago. In addition, the previous night’s Nationwide Series race received a 1.6 rating on ESPN, down from the previous year’s 1.9 Saturday afternoon rating on ABC.
Posted by Dave Moody at 1:39 PM