Even after all these years, there’s apparently still no shortage of bad blood between Rusty Wallace and Ryan Newman. It bubbled to the surface again late last week, when Wallace claimed Newman was fired recently by team owner Roger Penske.

Newman has contended that the decision to part was mutual, but Wallace said, "That didn't happen. Roger Penske called Ryan Newman up to his office and said, 'I don't need your services next year.'” 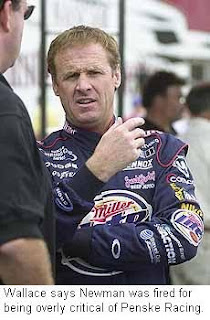 The former Sprint Cup Series champion claims Penske is angry with Newman’s recent criticism of the team, which has plummeted to 16th place in championship points after winning the season-opening Daytona 500. "I talked to Roger and he didn't like... all the negative stuff. Roger doesn't like anybody telling him his equipment is junk,” Wallace said. "Ryan and I never got along real well, that's for sure. We hyped forever and ever how (Newman) is an engineer… (but)they can't get that car figured out.

Told of Wallace’s comments, Newman scoffed, "Was he conscious when he said it? It doesn't matter to me. I know Rusty and his personalities - plural - and everybody is different. I don't know what Rusty's grounds are, or what he's trying to prove by saying that, (but) it wasn't the case, point-blank. Roger and I decided mutually not to continue, and it was more of my decision than it was his."

Newman admitted talking plainly to Penske about what he sees as the shortcomings of the #12 team, saying such honesty is part of any successful operation. "Nobody likes to be criticized as a driver, nobody likes to be criticized as an owner, but constructive criticism is part of what I have to do as a driver," he said. "If I don't feel like I have good equipment -- or as good equipment as the guy who is ahead of me -- then I speak up.

"You have to be able to stomach a percentage of that, whether you're a car owner or a crewchief or a guy changing tires. That's part of it. And I would expect the same thing in return."
Posted by Dave Moody at 9:37 AM