The dominoes continue to fall in place for next season, after Penske Racing and Ryan Newman announced today that they have agreed to go their separate ways in 2009. 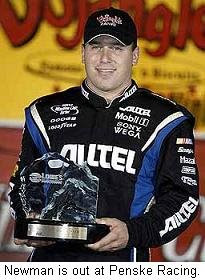 Team owner Roger Penske made the announcement today, saying, “We want to thank Ryan for his hard work and contributions to Penske Racing over the past nine years. We wish Ryan all the best for the future, and we’ll continue to focus our efforts on making the Chase…this season.”

He added that a new driver for the No. 12 Dodge will be announced in the near future.

The Indiana native said Saturday that he has three options to consider -- other than remaining at Penske -- and that ownership is part of at least one of those options. He declined to comment on last week’s Sirius Speedway report that he will join fellow Hoosier Tony Stewart at Stewart-Haas Racing next season, though sources now say that the deal is done and ready to be announced; most likely next weekend at Indianapolis Motor Speedway.

Newman said last month that he would not sign a new contract with Penske unless the team made significant improvements in performance. He is currently 16th in points after a tenth place finish Saturday night at Chicagoland Speedway.

Testing 1-2-3: NASCAR submitted a proposed 2009 testing policy to its teams Saturday night at Chicagoland, calling for 24 test days per team at tracks where the Sprint Cup Series competes.

Each team would be allowed a maximum of two cars per test, with all of the team’s drivers able to test. No driver will be allowed to test for a team other than his own. The proposal also includes a one-week “blackout period” prior to each race, and an offseason testing ban from November 1 through January 15; not including the regularly schedule Daytona preseason tests.

NASCAR will seek input and feedback from the teams before finalizing the new policy.
Posted by Dave Moody at 12:53 PM