Dale Earnhardt Inc. is expected to announce today that Aric Almirola will drive the No. 8 Chevrolet full-time next season, opening the door for Mark Martin to move to the #5 Chevrolet at Hendrick Motorsports. 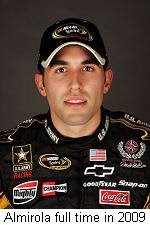 Team officials decided to promote Almirola to full-time competition because he has developed a good rapport with crewchief Tony Gibson, and because the 24-year old is a better demographic fit for the team’s U.S. Army sponsorship. Sirius Speedway reported two weeks ago that the Army is considering its options for 2009, and could leave DEI for another team. Elevating Almirola to full-time status could bolster DEI’s hopes of retaining the Army sponsorship for another year.

Initially, Almirola’s promotion was believed to be a result of Mark Martin’s decision to move to Hendrick next season. However, it now appears that the opposite was true. DEI reportedly told Martin during All-Star week at Lowe’s Motor Speedway that they had decided to run Almirola full-time in 2009, leaving the Arkansas veteran without a ride. Martin immediately began searching for another opening, and found one at Hendrick Motorsports.

He has been unavailable for comment, but is expected to announce his new ride later this week at Daytona International Speedway.
Posted by Dave Moody at 12:57 PM