The Montgomery (AL) Board of Adjustment met as scheduled last night, and the end result of that meeting is that the sale of Montgomery Motor Speedway is now on hold. 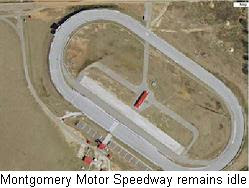 NASCAR Craftsman Truck Series driver Rick Crawford wants to purchase the 63-acre track, but needs a racing permit from the board before the deal can go through.
A handful of local homeowners have hired an attorney to block Crawford’s request permit request, arguing that the track is located on a flood plain, and that a recent three-year shutdown cost the track its grandfathered status as an existing use facility.

Last night’s meeting was contentious at times, with supporters on both sides of the debate packing the City Council chamber. At the end of the evening, board members approved a motion requiring Crawford and the landowners to try to resolve several key issues. The track purchase must be completed by July 31, however, making the timeline for negotiations extremely short. Crawford said his NASCAR Craftsman Truck Series schedule will make it difficult for him to meet with the homeowners within the next two weeks, meaning that even if a compromise can be reached, it will cannot be presented to the board until its next meeting on Aug. 21.

Both Crawford and track owner Bill Manfull say they are willing to push back the closing date, if necesary. Crawford said, "I'm going to try and get this resolved and work with everyone to get the place opened back up. This is my dream, and I'm going to keep trying."

Attorney Doyle Fuller, who represents the landowners, was less optimistic, saying, "There's nothing they can do about the noise and the traffic out there. We'll be happy to talk with Mr. Crawford, but I don't know how much we'll be willing to do."
Posted by Dave Moody at 11:32 AM