Joe Gibbs Racing and Tony Stewart made it official this morning, with an announcement that they have agreed to part ways at the end of this year.

Stewart will finish the 2008 season in JGR’s No. 20 Home Depot Toyota, and also run two more NASCAR Nationwide Series races for them, before moving on to other ventures in 2009. His next ride is expected to be with Haas-CNC Racing as an owner-driver, with sponsorship from Old Spice and Office Depot.

JGR President JD Gibbs said of the move, “While this moment is bittersweet, we’re parting on good terms, and we know that each of us has benefited greatly from the other. While our time together is coming to an end, we know there’s still a lot of racing left this season and we plan to make the most of it. We’re proud of everything we’ve accomplished together, and we wish (Tony) the best in pursuing his dream of NASCAR team ownership.”

Stewart said, “I cannot thank Joe and J.D. Gibbs enough for the opportunity they gave me, and for the support they’ve given me throughout my entire NASCAR career,” Stewart said. “I’ve learned so much from them and have a tremendous amount of respect for what they’ve built.”

Stewart also said that his longtime crewchief, Greg Zipadelli, will not accompany him to his new team, ending the longest active driver/crew chief relationship in NASCAR Sprint Cup racing. A formal announcement of Stewart’s future plans will take place tomorrow at 1:30 p.m. CT in the Infield Media Center at Chicagoland Speedway.

Multiple reports today have said that Stewart was “granted his release” by JGR. Nothing could be further from the truth.

Stewart bought out the final year of his contact with the financial assistance of General Motors and Chevrolet, and I’m told that the buyout did not come cheap. After all, JGR held all the cards in that particular negoatiation. Technically, they could have put Joey Logano in the #20 Toyota next season, paid Tony his salary and forced him to sit on the sidelines for all of 2009; effectvely scuttling all the sponsorship plans he has so painstakingly put in place over the last few weeks.

In short, they said to Tony, “If you want to go play somewhere else next season, that’s fine. But here’s what it’s going to cost. Take it or leave it.”

Elledge To RBR: Red Bull Racing announced today that veteran crewchief Jimmy Elledge will replace Ricky Viers atop the pitbox for the #84 Toyota piloted by AJ Allmendinger, beginning this weekend at Chicagoland Speedway. 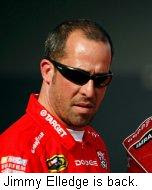 Elledge was released as crewchief of Juan Pablo Montoya’s Chip Ganassi Racing Dodge a few weeks ago, and has previously worked with drivers Casey Mears, Reed Sorenson, Kenny Wallace, Bobby Hamilton and Dale Jarrett. There is no word on Viers’ plans for the future, or if he will remain with the team in another capacity.

Franchitti Back In Chi-Town: Dario Franchitti will replace Brian Clauson in Chip Ganassi Racing’s #40 Fastenal Dodge in Friday night’s NASCAR Nationwide Series Camping World 300 at Chicagoland Speedway. Clauson’s entry was withdrawn late Tuesday afternoon, with Franchitti listed as a replacement. After shutting down Franchitti’s Sprint Cup operation last week, Ganassi said he had offered to put the Scotsman in the Nationwide car for the balance of he season. Franchitti said Sunday that he would meet with Ganassi this week before making a decision. 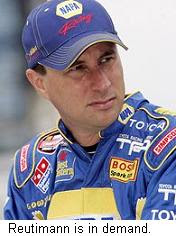 Reutimann Has Options: Published reports today have David Reutimann leaving Michael Waltrip Racing to replace Kyle Petty in the Petty Enterprises #45 Dodge next season. There has been no comment from any of the involved parties, and I will say only what I have said for a number of weeks; that David Reutimann is well-regarded by a number of teams in the Sprint Cup garage, and does not lack for options.
Posted by Dave Moody at 1:24 PM