NASCAR has made great strides in recent seasons to ensure the safety of its drivers. The sanctioning body’s new Sprint Cup Series car is a quantum leap forward in terms of safety, with a larger driver’s compartment and impact absorbing door foam among the most obvious improvements. Major advances in seat technology have further safeguarded the athletes, as have the HANS and Hutchens devices. Speedways hosting events in NASCAR top three national series have all installed SAFER barriers on their outside retaining walls, providing an impact absorbing surface where before there was immovable concrete and steel.

NASCAR Sprint Cup Series teams are not allowed to “pick and choose” when it comes to safety. Their cars are constructed according to a strict series of safety guidelines, with seats, helmets, firesuits and other driver safety apparel also checked by NASCAR on a regular basis. HANS devices are mandatory, not recommended.

Unfortunately, NASCAR has not always held its host speedways to the same high standard. While all tracks in the Sprint Cup, Nationwide and Camping World Truck Series have installed SAFER barriers on their outside walls, a few -– Pocono Raceway among them -– have lagged behind when it comes to protecting drivers from inside wall contact. Elliott Sadler’s horrifying crash Sunday provided graphic proof that there is room for improvement.

"I'm a little sore from where the belts grabbed me,” said Sadler in the aftermath of a crash that saw him hurdle head-on into an immovable steel ARMCO barrier (backed with tons of earth) at over 160 mph. The impact tore the engine from his US Air Force Ford and demolished the car from the firewall forward. “It knocked the breath out of me pretty good,” said Sadler, who has been upside-down twice at Talladega in recent seasons. “It's definitely the hardest hit I've ever had in a race car.”

Drivers have long been critical of the grassy runoff areas and ARMCO barriers lining the inside of Pocono’s backstretch. As far back as 2001, drivers decried the dangerous conditions there, after drivers Steve Park and Dale Earnhardt, Jr., rode out a savage encounter with the antiquated Pocono steel. “He slammed into that damn guard rail,” said crewchief Todd Parrott after Sadler’s crash. “But the car obviously did its job. I just walked out of the infield care center with a guy that four or five years ago wouldn’t have lived through the wreck. Elliott is a very lucky man from everything I can see.” 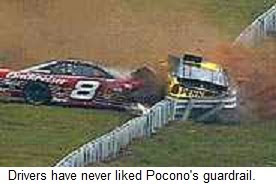 Unfortunately, Pocono is not the only track with room for improvement. Talladega, Daytona, Las Vegas and many other Sprint Cup Series venues still afford drivers an opportunity to hit immovable concrete walls at high speed. Perhaps it’s time for that situation to change.

Elliott Sadler’s crash proved just how far NASCAR has come in terms of safety. It also showed that there is still some work to do.
Posted by Dave Moody at 1:55 PM