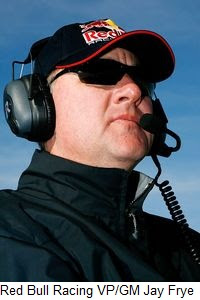 Red Bull Racing Vice President and General Manager Jay Frye told Sirius NASCAR Radio’s Sirius Speedway with Dave Moody that there is no truth to rumors that Red Bull owner Dietrich Mateschitz may pull the plug on the team.

“There is a huge commitment from Austria to this program,” said Frye. “Red Bull came here in 2006 as an owner and a sponsor, and they have done everything right. It’s become a joke in our team meetings every month. I usually have to say, `Everything’s fine, don’t believe the rumors.’ I guess it’s a compliment that they’re talking about us, but it’s also bothersome.

"There is a long term commitment by Red Bull to doing this program," Frye said. "They want to win and compete at a high level. That’s their expectation, and we feel the same way. We still young with a ways to go, but getting a guy like Kasey Kahne -- even for one year -- makes us better. This team isn’t going anywhere.”

Frye also said that options exist for the team to field three Toyotas for Kasey Kahne, Brian Vickers and Scott Speed, if necessary. Vickers is still months away from knowing whether he will be able to return to the cockpitin 2011, and Frye confirmed that the team is still evaluating Speed's performance, before making a final decision on his status for next season.
Posted by Dave Moody at 4:02 PM